The Mayor and The Judge: The Inside Story of the War Against COVID (Hardcover) 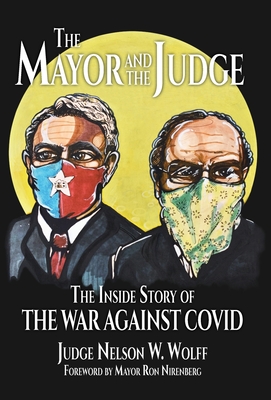 Never Fight a War on Two Fronts... so say military historians and strategists. Yet the War on Covid in the United States became almost as heated in the political arena as it did in the battlefields of hospital wards. "The Mayor and The Judge" tells the story of how one Texas city continues to fight back on both fronts...

The seventh-largest city in the United States, San Antonio was deemed a "model city" for its handling of the COVID-19 pandemic, and was ranked second in the nation among the 30 largest cities in terms of emergency readiness, according to a CNN report. This was due in no small part to the tireless efforts of Mayor Ron Nirenberg and Bexar County Judge Nelson Wolff, who maintained constant contact with the public throughout the darkest days of the war on COVID-19. Through daily media broadcasts, they kept San Antonio's citizens updated with health and safety guidelines, medical statistics and hospitalizations, as well as the latest news on treatments and vaccine developments. Mayor Nirenberg and Judge Wolff used every possible resource to gather information, sharing facts honestly and without prejudice, at a time when the country was largely divided by political mayhem and disinformation. They demanded answers and explanations from state and federal government officials regarding what were often contradictory and controversial decisions. In "The Mayor and The Judge" Nelson Wolff recounts those days spent in the trenches - from quiet moments spent in reflection and the loss of close personal friends, to setting up mass vaccination centers across the city - and the tumultuous political and legal battles he engaged in on an almost daily basis to help keep San Antonio safe. Emotional, gritty and at times humorous, Judge Wolff writes with passion and vigor - and he doesn't pull any punches.