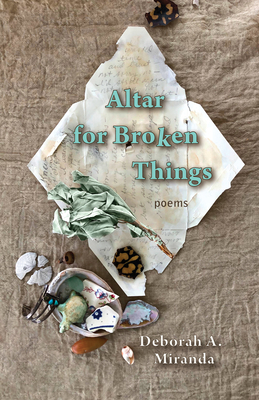 These poems explore interlocking themes of sacrifice willing and forced and the sacred dimension of nature and the need for healing in the suffering world.

An enrolled member of the Ohlone-Costanoan Esselen Nation of California, poet Deborah A. Miranda was born in Los Angeles to an Esselen/Chumash father and a mother of European ancestry. She grew up in Washington State, earned a BS in teaching moderate special-needs children from Wheelock College in 1983 and an MA and PhD in English from the University of Washington in 2001. Miranda’s collections of poetry include Raised by Humans (2015); Indian Cartography: Poems (1999), winner of the Diane Decorah Memorial First Book Award from the Native Writers’ Circle of the Americas; and The Zen of La Llorona (2005), nominated for a Lambda Literary Award. Miranda also received the 2000 Writer of the Year Award for Poetry from the Wordcraft Circle of Native Writers and Storytellers. Her mixed-genre collection Bad Indians: A Tribal Memoir (2013) won a Gold Medal from the Independent Publishers Association and the PEN Oakland Josephine Miles Literary Award and was shortlisted for the William Saroyan Award. She is Thomas H. Broadus, Jr. professor of English at Washington and Lee University.

“The element called Colonialism is composed of ‘toxic events,’ Deborah Mi­randa says, so she urges us to choose ‘Indigenous elements/Story, Dance, and Song.’ These elements allow Miranda to look on damage and still worship cre­ation’s gorgeousness and life. Each poem is a ripeness offered—to unknown gods—in fruit, flower, feathers, even flesh ended in rampage, the burnt sacri­fice implied in the word altar. Yet in these poems bees still pollinate, oysters still make pearls, women still yearn to scratch ‘the smell of exile’ and broken­ness off their skins to wade away from regret, to die blessed or live free in the world’s many waters.”
—Heid E. Erdrich

“Altar for Broken Things is a lyrical pilgrimage for devotion and integrity in which the land itself is the site of worship. Miranda’s poetry takes an encompassing view of the ways that perception and intent intersect with faith. An altar, the reader is reminded, takes its name  from elevation.  As  these  poems  guide  the  reader,  it  is  made  clear  that  altars abound. The  currents  of these  poems move  in  the  territory  of  the  sublime,  but  the abiding faith and beauty of the speaker’s telling is an unimpeachable guide.”
—Laura Daʼ, Transmotion