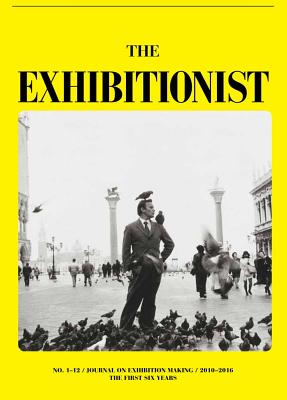 A journal by curators for curators, The Exhibitionist has asked the most pertinent questions on contemporary exhibition-making since its founding in 2009

The Exhibitionist: Journal on Exhibition Making is an anthology of the first 12 issues of the journal about contemporary curating that bears the same name. Established in 2009 as a forum for critical reflection on exhibition-making and curatorial practice, The Exhibitionist has always defined itself as "by curators, for curators." Modeled after the iconic French film journal Cahiers du cin ma, The Exhibitionist has served a critical role in examining current curatorial practices by focusing specifically on the exhibition format as a site of experimentation and inquiry. The Exhibitionist has historicized, analyzed and critiqued a phenomenon it is itself symptomatic of--the rise of the curator since the 1960s, the ensuing explosion of curatorial creativity and the growing fascination with the discipline of curating.

Over the six years of its run, The Exhibitionist has published writings from many of the most prominent curatorial voices in the field, offering a who's who of curatorial practice; contributors include Okwui Enwezor, Hans Ulrich Obrist, Mary Jane Jacob, Nato Thompson, Jessica Morgan, Maria Lind, Sof a Hern ndez Chong Cuy and Massimiliano Gioni, to name just a select few. Collected together in a monumental omnibus edition (clocking in at 975 pages), the complete run of the journal is accompanied by a new introduction by founding editor Jens Hoffmann, and a critical approach to a theory of the exhibition by senior editor Julian Myers-Szupinska. With the publication of this volume, The Exhibitionist closes a chapter of its existence as a print magazine and shifts its activities to the-exhibitionist.com.