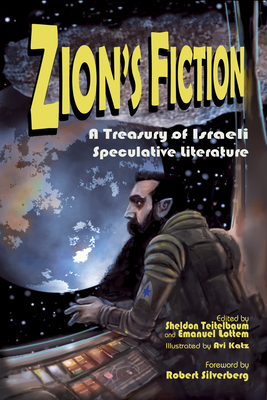 This anthology showcases the best Israeli science fiction and fantasy literature published since the 1980s. The stories included come from Hebrew, Russian, and English-language sources, and include well-known authors such as Shimon Adaf, Pesach (Pavel) Amnuel, Gail Hareven, Savyon Liebrecht, Nava Semel and Lavie Tidhar, as well as a hot-list of newly translated Israeli writers. The book features: an historical and contemporary survey of Israeli science fiction and fantasy literature by the editors; a foreword by revered SF/F writer Robert Silverberg; an afterword by Dr. Aharon Hauptman, the founding editor of Fantasia 2000, Israel's seminal SF/F magazine; an author biography for each story included in the volume; and illustrations for each story by award winning American-born Israeli srtist, Avi Katz.

"Zion's Fiction will supply a distinctive bright line to the spectrum of futuristic fiction, which stands in sore need of broadening, in the cause of promoting cross-cultural understanding as well as showcasing exciting new talent."- Brian Stableford, author of over 70 novels and renowned SF historian

"Zion's Fiction explores the unlimited dreams of a people who have learned to stand on shifting ground. To face a future filled with danger and hope, forging into territory that can only be surveyed with the lamp of imagination on our brows."- David Brin, multiple Hugo and Nebula award-author of EARTH and Existence

"When my collection Wandering Stars: An Anthology of Jewish Fantasy and Science Fiction was published in 1974, It] became a classic. And now...we have the first ever anthology in the entire universe of Israeli fantasy and science fiction: Zion's Fiction...Go forth and read...and may you find Zion's Fiction unexpected, delightful, and delirious " -Jack Dann, award winning author and editor of over 75 books including The Memory Cathedral and The Silent

"The basic joy in science fiction and fantasy is the chance to look inside minds different from your own. Here's your chance. Some bright minds in the nation of Israel have been exercising their imaginations, sharing their different dreams and nightmares, and the results are ours to enjoy." - Larry Niven, a multiple Hugo and Nebula Award-winning author of the Ringworld Series

Sheldon Teitelbaum, an award-winning Los Angeles-based Canadian/American/Israeli writer, and former member of the Editorial Board of Fantasia 2000, is a longtime commentator on Jewish and Israeli science fiction and fantasy literature who has published widely in the Los Angeles Times, Cinefantastique, The Jerusalem Report, Foundation: The Review of Science Fiction, and The Encyclopedia of Science Fiction

Emanuel Lottem, a central figure in Israeli science fiction and fantasy scene and former member of the Editorial Board of Fantasia 2000, is the translator and editor of some of the best SF/F books published in Hebrew, and a moving force in the creation of the Israeli Society for Science Fiction and Fantasy.

Avi Katz, an award-winning American-born Israeli illustrator, cartoonist, and painter, is the staff illustrator of Jerusalem Report magazine. He has illustrated over 170 books in Israel and the United States.

Sheldon (Sheli) Teitelbaum is a Los Angeles-based Canadian/Israeli editor and writer, a former contributor to and member of the editorial board of the seminal Israeli SF magazine Fantasia 2000. He has contributed essays on Jewish and Israeli SF/F to the scholarly journal Foundation: The Review of Science Fiction, to the SF/F trade magazine Locus, and to the authoritative second and third (online) editions of The Encyclopedia of Science Fiction and The Encyclopedia Judaica.Teitelbaum has also covered SF film, television, books and dark fantasy extensively for Cinefantastique, Cineaste, Midnight Graffiti, The Los Angeles Times, Wired, SF Eye, the Jerusalem Report, The Forward and the Jerusalem Post. The second and subsequent online edition of the Encyclopedia of Science Fiction (Orbit, 1993) cited him as the first Israeli critic to contribute a regular column on science fiction to a daily Israeli newspaper. Dr. Adam Rovner, an Associate Professor of English and Jewish Literature at the University of Denver, generously (if extravagantly) described Teitelbaum in the Los Angeles Jewish Journal as "the expert in the area of Israeli sci-fi."Teitelbaum, a long time senior writer for the Jerusalem Report, received Canada's first Northern Lights Award, three Brandeis University Jewish Press Association Awards and a Bronze Quill Award from the International Association of Business Communicators. He is a member of the Israeli Society for Science Fiction and Fantasy.Emanuel Lottem, Ph.D. (Econ) Emanuel Lottem has been a central figure in the Israeli science fiction and fantasy scene since the mid-1970s: Translator of some of the best SF/F books published in Hebrew and editor of others; advisor to beginning writers; the moving force in the creation of the Israeli Society for Science Fiction and Fantasy and its first Chairman; the founder of its annual ICon conventions and other activities.Lottem's first SF translation was Frank Herbert's Dune, which has become a classic. According to Israeli literary historian Eli Eshed, "this translation is considered a masterpiece of SF translations"; and according to the Hebrew Wikipedia, "some consider it even better than the original version", a flattering characterization which Lottem nonetheless disagrees with. More SF/F translations followed, and Lottem's name became familiar to and respected by Hebrew-reading fans.After a few career changes, Lottem became a freelance translator and editor. In addition to SF/F, he also specializes in popular science and military history. In 1983, Lottem became chairman of the editorial board of the Israeli SF/F magazine Fantasia 2000, which unfortunately (but in terms of the exigencies of Israeli publishing, perhaps miraculously as well) lasted for 44 issues before rolling down its awning. A few years later, in 1996, Lottem presided over the inaugural meeting of the Israeli Society for Science Fiction and Fantasy, which he founded with a small group of devoted fans. Visiting author Brian Aldiss officially announced the ISSF&F open for business, and Lottem was unanimously elected its first Chairman.To date, Lottem's SF/F translations include works by Douglas Adams, Poul Anderson, Isaac Asimov, Alfred Bester, Lois M. Bujold, C.J. Cherryh, Arthur C. Clarke, Michael Crichton, Philip K. Dick, William Gibson, Robert A. Heinlein, Frank Herbert, Ursula Le Guin, Ann Leckie, Larry Niven, Mervyn Peake, Robert Silverberg, James Tiptree, Jr., J.R.R. Tolkien, Jack Vance, and Connie Willis, among many others. In 1994 Lottem won one of Israel's highest translation awards, the Tchernichovsky Prize, for his translation of Richard Dawkins's The Selfish Gene.Avi Katz, Illustrator, is a veteran American-born Israeli illustrator, cartoonist and painter. His interest in SF/F illustration began early; while still a teenager in Philadelphia he sent a pack of his Lord of the Rings art to J.R.R. Tolkien, and received an enthusiastic response from the author, who told him he was the first illustrator to portray the dwarves as he intended.At age 20, while studying art at Berkeley, he was interviewed by John W. Campbell but decided to avoid the draft and Vietnam and complete his studies at the Bezalel Academy of Art in Jerusalem, and has made his home in Israel since then. He has been the staff illustrator of The Jerusalem Report magazine since its first issue in 1990 and is active in the international organization Cartooning for Peace, as well as the Association of Caricaturists in Israel. He has illustrated some 170 books in Israel and the U.S., which have won the National Jewish Book Award, Hans Christian Andersen honors, Ze'ev Prize and others; he was a nominee for the lifetime- achievement Astrid Lindgren Award.A founding member of the Israel Society for Science Fiction and Fantasy, Katz created many original book covers for SF/F published in Israel; his illustrations graced the covers of Society posters and all the issues of The Tenth Dimension fanzine over the decade of its publication. He has exhibited at various sci-fi conventions including WorldCon 2003, and was Guest of Honor at ICon 2002. He is featured in the book Masters of Science Fiction and Fantasy Art (Rockport Press).