The Jayhawker Cleveland: Phantom Horseman of the Prairie (Hardcover) 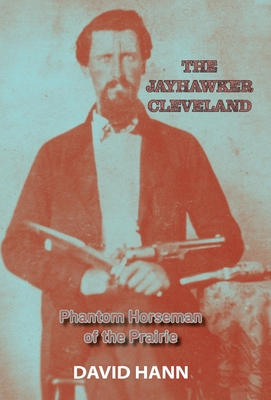 The Free State of Kansas and the slave state of Missouri are the backdrop of this tale of heroic deeds and fatal mistakes. David Hann takes the reader on a trail ride through a gritty time in the American West when people were pitted against each other and some had to choose sides in a life-and-death battle of ideas.

A legend in his own time, Cleveland rode into Leavenworth alone in June, 1861 to view his own "Wanted Dead or Alive" poster. No one in that town of 12,000 inhabitants, nor any soldiers from Fort Leavenworth, attempted to collect the reward, and Cleveland rode slowly out of town, tipping his hat.

The Jayhawker Cleveland is a story of a man and his times. Culled from 1860s newspaper articles and published reports of a tumultuous and violent era in American history, Hann describes how this liberator of slaves and horses found brief but deadly fame during the Kansas Missouri Border War.

Intended for the Young Adult audience, older folks will surely enjoy the bravado and adventure portrayed so adeptly in Hann's The Jayhawker Cleveland.

"Clawed from the dust and given breath, The Jayhawker Cleveland presents an historic figure now largely forgotten who grew from a naive youth to a man of ruthless courage fit to a violent age. Fast paced and gripping, the story takes you to the bloody border of Kansas and Missouri at the outbreak of the Civil War. No doubt our hero, Marshall Cleveland, would be pleased by his dramatic portrayal herein."