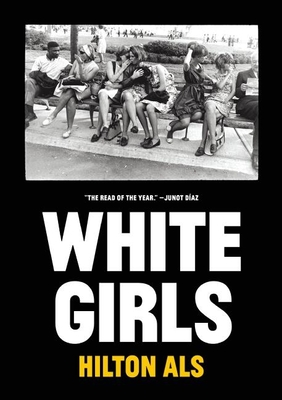 By Hilton Als
Unavailable, our apologies.
Out of Print

One of the incomparable reads of the year, with great, elegiac passages and one of the most unique, considered points-of-view you'll experience. What Als appears to be getting at is taking an essence of oneself and filtering it through an otherness, an alternate perspective, through which one might find joy, personal enlightenment. It could just as well be called Black Boys (or gay black boys), Sisters, or White Men. Yes, "white girls", for sure, but also gay men, black mothers, Eminem, and Malcolm X (or his half-caucasian mother).

"The read of the year." --Junot D az White Girls, Hilton Als's first book since The Women 16 years ago, finds one of The New Yorker's boldest cultural critics deftly weaving together his brilliant analyses of literature, art, and music with fearless insights on race, gender, and history. The result is an extraordinary, complex portrait of "white girls," as Als dubs them--an expansive but precise category that encompasses figures as diverse as Truman Capote and Louise Brooks, Michael Jackson and Flannery O'Connor. In pieces that hairpin between critique and meditation, fiction and nonfiction, high culture and low, the theoretical and the deeply personal, Als presents a stunning portrait of a writer by way of his subjects, and an invaluable guide to the culture of our time.

Before working at The New Yorker, Hilton Als was a staff writer for The Village Voice and an editor-at-large at Vibe. He has also written articles for The Nation and collaborated on film scripts for Swoon and Looking for Langston. The winner of writing awards from the New York Association of Black Journalists and the Guggenheim Foundation, he lives in New York City.