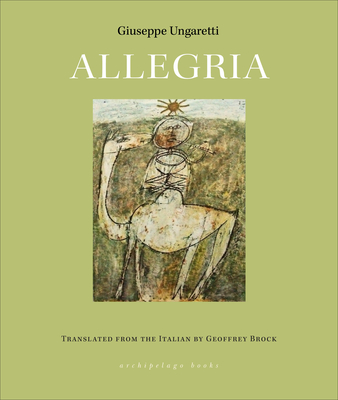 Geoffrey Brock, whose translations have won him Poetry magazine's John Frederick Nims Memorial Prize and a Guggenheim Fellowship, finally does justice to these slim, concentrated verses in his English translation, alongside Ungaretti's Italian originals.

Famed for his brevity, Giuseppe Ungaretti's early poems swing nimbly from the coarse matter of tram wires, alleyways, quails in bushes, and hotel landladies to the mystic shiver of pure abstraction. These are the kinds of poems that, through their numinous clarity and shifting intimations, can make a poetry-lover of the most stone-faced non-believer. Ungaretti won multiple prizes for his poetry, including the 1970 Neustadt International Prize for Literature. He was a major proponent of the Hermetic style, which proposed a poetry in which the sounds of words were of equal import to their meanings. This auditory awareness echoes through Brock's hair-raising translations, where a man holding vigil with his dead, open-mouthed comrade, says, "I have never felt / so fastened / to life."

Giuseppe Ungaretti (1888-1970) was born in Alexandria to Italian settlers--his father was a laborer working on the Suez Canal and his mother ran a bakery. Ungaretti left for Paris to study at the Sorbonne, where he befriended Guillaume Apollinaire, Paul Valéry, Picasso, Braque, and Léger. Ungaretti wrote his first book of poetry while serving in the Italian Army in World War I. From 1936 until 1942, he taught Italian literature at the University of São Paulo in Brazil. After the death of his nine-year-old son, Ungaretti published a collection of poems, Il dalore, which expressed both tragic personal loss and horror at the atrocities of Nazi Germany. Ungaretti translated Shakespeare, William Blake, and Racine into Italian, among others. He died in Milan in 1970.

Geoffrey Brock was born in Atlanta and holds an MFA from the University of Florida and a PhD from UPenn. He has won multiple prizes for his original poetry, including the New Criterion Poetry Prize. For his translations, which include work by Cesare Pavese and Umberto Eco, Brock has won Poetry magazine's John Frederick Nims Memorial Prize, a Guggenheim Fellowship, the MLA's Lois Roth Translation Award, and the PEN Center USA award for translation.

"Ungaretti’s first book-length collection of poems appeared almost a century ago. It transformed modern Italian poetry and announced the arrival of a unique voice in world poetry . . . The slender poems celebrate life, inflecting its light, memory, and mystery, and seizing the eternal from the seemingly ephemeral in vivid and striking imagery. This elegant translation preserves Ungaretti’s economy and his pursuit of poetic purity."— National Translation Award committee

"The sequence of poems is strong, the verse compact but not terse. [Allegria] is wartime poetry, crisply conveying the feel of both battle and the uncertainty beyond it." -- M.A.Orthofer, The Complete Review

". . . These poems burn like sparks of emotion, flashes of understanding, splinters of insight. However, despite their diaristic form, intensified by the horrors of war in the trenches, there is nothing fragmentary or unfinished about them; on the contrary, they aim to represent the totality of experience in the infinite and fathomless details of its unfolding . . ."  -- Graziano Krätli, World Literature Today

"If a poet’s first book represents a rebirth into language and the announcement of an arrival, then Allegria di naufragi introduces Ungaretti as a newly christened European and still spiritually loyal to the “bottomless” mystery of his and our origins." -- Ron Slate, On the Seawall

"What a joy to have this new translation of Ungaretti, a great lyric poet so masterly translated by Geoffrey Brock. I will buy any book of poetry that Brock has translated. He is simply that good. But it is especially clear here, in the pages of Allegria, where the shortish lines test the translator's ability to deliver nuance with light touch, precision, and almost Mozartian grace. The poems themselves praise the fleeting moment in the middle of crisis, praise the spark of tenderness in the time of misfortune, praise the breadcrumbs of rememberings in the hungriest of times, when no one remembers and everyone zigzags around the room, around the street, around one's heart. This book will give you 'a momentary stay against confusion.' It is a beautiful gift." -- Ilya Kaminsky, author of Deaf Republic and Dancing in Odessa

"In their comparative abstraction, melancholy timbre and interest in the passing of time, Ungaretti's early poems are in the tradition of Leopardi ... his decisive novelty in Italian - the tiny lines, the absence of punctuation, the consequent focus on each individual word - owes more to the stimulus of Mallarmé and Apollinaire ... His crystalline poems often emerged from a process of cutting; in his work ... the placing of words has an almost pictorial suggestiveness." -Matthew Reynolds, London Review of Books

"The poems of L’Allegria do not just present, distilled and remade concrete in language, an impression, a moment, an insight. They do all this and they bear witness; they bear witness both to an objective, external reality, and to this reality as it is experienced, felt, lived . . . Geoffrey Brock’s new translation . . . is as faithful and rewarding as any English rendition of Ungaretti’s work could be." — Nicola Vulpe, Manhattan Review

"With his latest translation, Brock does justice to one of the masterpieces in Italian poetry, one which had a long-lasting influence on subsequent generations of poets . . . Brock then once again offers to the English-speaking readership a collection of poems which in their brevity and crystalline clarity resonate with our modern taste." — Elena Borelli, Reading in Translation

"Ungaretti's poetry, born in the ordeal of World War I and its trenches ... marked a turning point in modern Italian literature." -Glauco Cambon

"Ungaretti purged the language of all that was but ornament, of all that was too approximate for the precise tension of his line. Through force of tone and sentiment, and a syntax stripped to its essential sinews, he compelled words to their primal power." -Allen Mandelbaum

"One of the most authentic poets of Western Europe." -T. S. Eliot