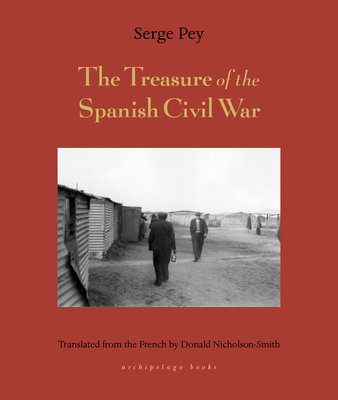 By Serge Pey, Donald Nicholson-Smith (Translated by)
$18.00
On Our Shelves

An intimate portrait of childhood during Spain's violent fascist regime, rendered in a surreal kaleidoscope of linked stories.

Serge Pey's stories are lyrical, vivid vignettes of life during and directly following Spain's violent fascist regime of the thirties and forties. The collection is a defiant ode to the resilience of the human spirit, each story depicting a small act of human resistance: a man plants a fruit tree for each of his assassinated comrades; a professor hides a secret library of banned books in plain sight. Many of the stories are surreal, fable-like impressions from the perspective of children caught in the midst of the political violence. Pey's understated yet unusual prose renders a brutal landscape with childlike wonder. The Treasure of the Spanish Civil War and Other Tales is a strikingly original meditation on courage, survival, and hope in the face of oppression.

Serge Pey is a French writer, poet, and visual and performance artist. A child of the Spanish Civil War, Pey was born in Toulouse to a working class immigrant family. Pey's work is inseparable from his political conscience and focuses on the intersection of poetry and revolution. Pey received the Grand Prix de Poesié in 2017 for Flamenco and the Boccace Prize in 2012 for Treasures of the Spanish Civil War and Other Tales. He is also a laureate of the Robert Ganzo Poetry Prize. Pey now teaches contemporary poetry at the University of Mirai. About the Translator: Donald Nicholson-Smith's translations include works by Thierry Jonquet, Guy Debord, Paco Ignacio Taibo II, Henri Lefebvre, Paoul Vaneigem, Antonin Artaud, Jean Laplanche, and J.B. Pontalis. His translation of Apollinaire's Letters to Madeleine was shortlisted for the 2012 French-American Foundation Prize for Nonfiction and in 2014 he won the Foundation's Fiction Prize for his translation of Jean-Patrick Manchette's The Mad and the Bad. His translation of In Praise of Defeat by Abdellatif Laâbi was shortlisted for the Griffin Poetry Prize in 2017. He has been named a Chevalier des Arts et Lettres for services to French literature in translation.


"Lyrical, oneiric, wrenching . . . [The collection's] beauty speaks to the collective, if precarious, survival of clandestine, resistant communities who, for all the violence they have suffered, refuse to be defined by it." — Carlos Varón González, Public Books

• "Donald Nicholson-Smith's translations hold fast to this poetry's unnerving eloquence and simplicity, and its hell-for-leather speed." - T.J Clark on In Praise of Defeat (shortlisted for the 2017 Griffen Poetry Prize)


• "Presenting the text en face, translator Donald Nicholson-Smith navigates the poet's many styles and moods with poise and opens this landmark writer's body of work up to nonfrancophone readers." - World Literature Today on In Praise of Defeat