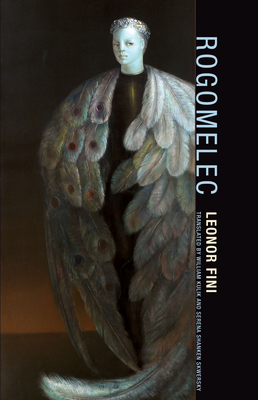 Originally published in French in 1979, Rogomelec was the third of Leonor Fini's novels. All the qualities of the paintings for which she is famed can be found in it: an undermining of patriarchy, the ambiguities of gender and the slipperiness of desire, along with darker hints of cruelty and the voluptuousness of fear.

This novella's ambiguous narrator sets off for the isolated locale of Rogomelec--where a crumbling monastery serves as a sanatorium and offers a cure involving a diet of plants and flowers--and moves through a waking dream of strangely scented monks, vibratory concerts in a cavernous ossuary and ritualist pomp with costumes of octopi and shining beetles. As the days unfold, the narrator discovers that the "the celebration of the king" is approaching, the events of which will lead to a shocking discovery in Rogomelec's Gothic ruins. This first English translation includes 14 drawings by Fini that accompanied the novella's original publication. Born in Argentina and raised in Italy, Leonor Fini (1907-96) concluded a rebellious youth with a move to Paris, where there followed six decades of work as artist, illustrator, designer and author with ties to the Surrealist movement. Rejecting the role of muse, her work focused on portrayals of women as subjects with desire rather than objects of desire. She was featured in MoMA's landmark 1936 exhibition Fantastic Art, Dada, Surrealism, and imagery from her painting Le Bout du Monde was used by Madonna in her 1994 video Bedtime Story. Fini's first Paris show was curated by Christian Dior; while working for Schiaparelli she designed the bottle for Shocking, the designer's top-selling perfume (and the acknowledged inspiration for Gaultier's torso-shaped bottles). She also designed the costumes for two films, Renato Castellani's Romeo and Juliet (1954) and John Huston's A Walk with Love and Death (1968). Fini is also well known for her illustrations for Pauline Reage's Story of O (one of her costumes inspired the book's final scene).