A Death: Notes of a Suicide (Paperback) 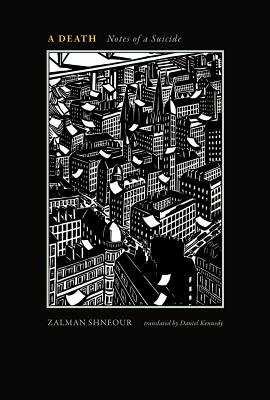 Comparisons to Dostoyevsky at his most embittered are warranted, but Shneour’s misanthropic narrator also often sounds like an incel getting ready for a shooting spree. I don’t know how much of this uncannily contemporary impression is thanks to Irish yiddishist Daniel Kennedy’s new translation of this 1905 bestseller, but the social isolation, the informally acquired gun, and the involuntary celibacy are all there no matter how you translate it.

In a Yiddish take on Notes from Underground, a dark love affair develops in an unnamed Eastern European city between the young, impoverished, violently self-loathing teacher, Shloyme--and a hungry, spiteful and unsettlingly sensual revolver. Ostensibly purchased to protect Shloyme from the pogroms sweeping the empire, the weapon instead opens a portal to his innermost demons, and through it he begins his methodical mission to eradicate any remnants of life and humanity in him and pave the way for his self-destruction. A Death takes the form of a diary that follows the Jewish calendar.

Written in Yiddish in 1905 and published with immediate success in Warsaw in 1909, A Death utilizes the influences of Dostoyevsky and Schopenhauer to depict a distinctly Jewish experience of uprooted modernity, and presents a lesser-known strand of Jewish decadent literature. This translation of his inaugural novel is Schneour's first appearance in English since 1963. Its exploration of alienation, mental health, toxic masculinity and violence is remarkably contemporary. Born in Shklow, Zalman Shneour (1887-1959) was one of the major figures of Jewish modernity, and was the most popular Yiddish writer between the World Wars. He wrote poetry, prose and plays in both Yiddish and Hebrew. Like many of his generation, his life was spent moving from city to city in search of literary community or escaping political turmoil: from Odessa to Warsaw to Vilne, and on to such Western cities as Bern, Geneva, Berlin, Paris, New York (where he died) and Tel Aviv (where he is buried).