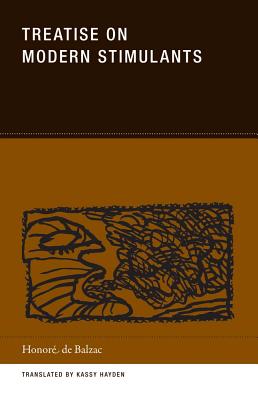 Honor de Balzac's Treatise on Modern Stimulants is a meditation on five stimulants--tea, sugar, coffee, alcohol and tobacco--by an author very conscious of the fact that his gargantuan output of work was driven by an excessive intake (his bouts of writing typically required 10 to 15 cups of coffee a day) that would ultimately shorten his life. First published in French in 1839 as an appendix to Jean Anthelme Brillat-Savarin's Physiology of Taste, this Treatise was at once Balzac's effort at addressing what he perceived to be an oversight in that cornerstone of gastronomic literature; a chapter toward his never-completed body of analytic studies (alongside such essays as Treatise on Elegant Living) that were to form an overarching pathology of social life; and a meditation on the impact of pleasure and excess on the body and the role they play in shaping society.

Balzac here describes his terrible and cruel method for brewing a coffee that can help the artist and author find inspiration; explains why tobacco can be credited with having brought peace to Germany; and describes his first experience of alcoholic intoxication (which required seventeen bottles of wine and two cigars). Beyond its braggadocio and whimsy, though, this treatise ultimately speaks to Balzac's obsession with death and decline, and attempts to confront in capsule form the broader implications of dissipating one's vital forces. This edition includes illustrations to an earlier French edition by Pierre Alechinsky.