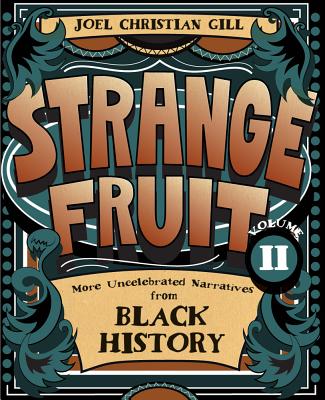 Like all legends, people fade away, but not before leaving an incredible legacy. Strange Fruit, Volume II: More Uncelebrated Narratives from Black History is a collection of stories from early African American history that represent the oddity of success in the face of great adversity. Each of the eight illustrated chapters chronicles an uncelebrated African American hero or event. Joel Christian Gill offers historical and cultural commentary on heroes whose stories are not often found in history books, such as Cathay Williams, the only known female Buffalo Soldier, and Eugene Bullard, a fighter pilot who flew for France during World War I. These beautifully illustrated stories offer a refreshing look at remarkable African Americans.

The stories included in Volume II are: Jourdan Anderson who requested payment from his former slave owner; Stagecoach Mary Fields, the first African-American female star route mail carrier; Willie Kennard, the Sheriff of the Colorado gold mining town of Yankee Hill; Cathay Williams, the only known female Buffalo Soldier; Blind Tom Wiggins, an autistic musical prodigy; Millie and Christine McCoy, conjoined twins known as "The Two-Headed Nightingale"; Victor Green, the creator and publisher of "The Green Book for the Negro Motorist"; and Eugene Bullard, a fighter pilot who flew for France during WWI.

Joel Christian Gill is the Chair of Foundations at the New Hampshire Institute of Art and recipient of the 2016 Boston University College of Fine Arts Alumni Award. He wrote the words and drew the pictures in Strange Fruit, Volume I: Uncelebrated Narratives from Black History, Bass Reeves: Tales of the Talented Tenth, no. 1, and Bessie Stringfield: Tales of the Talented Tenth, no. 2.
Joel received his MFA from Boston University and a BA from Roanoke College. His secret lair is behind a secret panel in the kitchen of his house (sold separately) in New Boston, New Hampshire. For more information about Joel Christian Gill, reread this paragraph and enjoy.
Joel Christian Gill believes that 28 days are not enough when it comes to Black History. Join the discussion on social media by following Joel’s #28DaysAreNotEnough, his call-to-action about Black History. Visit his website at www.joelchristiangill.com or connect with him on Twitter (@jcg007).

"These fascinating stories are all presented in such an easily accessible and engaging way that I sat down to read one and finished the whole book. I can’t imagine what sort of impact having learned these stories growing up would have had on me, but I believe I would have had more faith in myself, what I was capable of, and of my resiliency had I knows of these remarkable individuals." —Karyn Parsons, actress, The Fresh Prince of Bel-Air

"With Strange Fruit, Volume II, Gill continues to skillfully and thoughtfully tell the stories of the forgotten visionaries, revolutionaries, and everyday folks of black history. This book is a shining example of the need to share the lesser-known narratives that add to the richness and complexity of the black experience." —Whitney Taylor, author and illustrator, Wallpaper and Ghost Stories