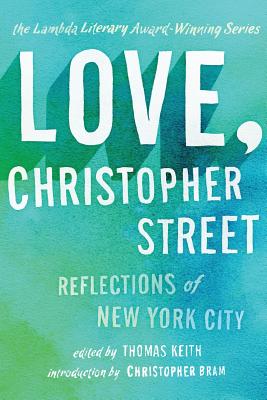 Representing some of the most talented writers at work today, the 26 original essays in Love, Christopher Street encompass revealing, intense, profound, funny, personal, and queer reflections that span forty years of gay, lesbian, bisexual, and transgender life in the Bronx, Brooklyn, Manhattan, Queens, and Staten Island. Together these essays create an LGBT love letter to New York City from native New Yorkers, American transplants, and international writers. This book continues the Lambda Award-winning series of LGBT tributes to great cities. Just a few of the quintessentially queer essays include the Rev. Irene Monroe's account of the hot summer night in 1969 when she witnessed police raiding the Stonewall Inn on Christopher Street and the drag queens who fought back; Bob Smith's memoir of his life as an out stand-up comedian in the 1980s and how he has kept his fierce humor while faced with the diagnosis of ALS; Penny Arcade's saga of being a runaway in NYC and taken in off the streets by gay men who introduced her to Warhol's Factory; Ocean Vuong's chronicle of how he went from being a couch-surfing college student to homeless in Penn Station; and civil rights activist Brendan Fay reveals what took him all the way from Ireland to "Finding Jes's on Christopher Street." Contributors include Mark Ameen, Penny Arcade, Christopher Bram, Brendan Fay, Thomas Glave, Jewelle Gomez, Aaron Hamburger, Martin Hyatt, Fay Jacobs, G. Winston James, Michele Karlsberg, Shaun Levin, Amos Mac, David McConnell, Val McDermid, Rev. Irene Monroe, Rabbi Andrea Myers, Nicky Paraiso, Felice Picano, Charles Rice-Gonz lez, Eddie Sarfaty, Justine Saracen, Bob Smith, Shawn Syms, Charlie V zquez, Ocean Vuong, and Kathleen Warnock.

“It is best to read Love, Christopher Street like one would listen to oral histories or study photo albums; to interpret these stories as snapshots in time, as pieces of the eight million piece jigsaw puzzle known as New York City. The twenty-eight contributors represent LGBTA New Yorkers of various ethnicities, classes, and generations. Forty years of LGBTA history in New York are captured in these stories, for it is impossible to talk about LGBTA New York without talking about cruising, gay bars, Greenwich Village, Stonewall, AIDS, 9/11, and marriage.”

“One reads Love, Christopher Street to see how other people, like and unlike yourself, encountered and endured and learned from New York, and that’s why this extremely varied anthology is always interesting, even when tangential, and why it’s often moving.”

“No matter what your relationship is with New York City, you’re bound to find something here to make you smile, laugh or be homesick. And if you are one of those few people who have no relationship with the Big Apple, maybe this will spark your desire to establish one.”

—Jerry Wheeler, Out in Print