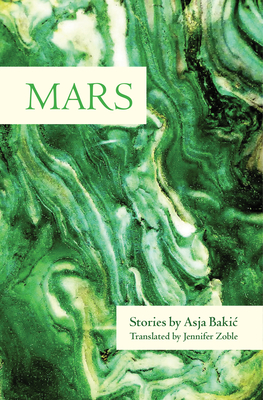 Each of these unsettling stories builds quietly to a startling finish; whether darkly humorous or irremediably bleak. Somewhere between science fiction and comedic horror, the ways in which Bakić's hapless characters are placed in contradiction to unknowable surroundings is politically rife. Like a feminist version of Roald Dahl's macabre fiction, with a Tarkovskyan twist.

This debut collection of darkly humorous, feminist speculative fiction from the Balkans of sly, uncommon stories by a major talent (Jeff VanderMeer, author of Borne).

Mars showcases a series of unique and twisted universes, where every character is tasked with making sense of their strange reality. One woman will be freed from purgatory once she writes the perfect book; another abides in a world devoid of physical contact. With wry prose and skewed humor, an emerging feminist writer explores twenty-first century promises of knowledge, freedom, and power.

"Bakic's stories are a dark delight--a treasury of forbidden pleasures, moments of resistance and resilience, and terrifying possibilities." --Strange Horizons

"At turns funny, surreal, and grounded in simple language but flung through twisted realities, the stories in this collection are provocative and utterly readable." --The Brooklyn Rail

Asja Bakic (1982) is a Bosnian poet, writer, and translator. She was born in Tuzla, where she obtained a degree in Bosnian language and literature. Her second book, a collection of short stories entitled Mars (2015), was shortlisted for the Edo Budisa Award for young writers. Her poems and stories have been translated into English, Polish, Czech, Macedonian, Slovenian, Romanian and Swedish. She writes the blog In the Realm of Melancholy (asjaba.com) and is coeditor of the feminist webzine Muff (muf.com.hr). She currently lives and works in Zagreb, Croatia. Jennifer Zoble is a writer, editor, educator, and literary translator. She coedits InTranslation, the online journal of international literature that she cofounded in 2007 at The Brooklyn Rail; teaches academic and creative writing in the interdisciplinary liberal studies program at NYU; and translates Bosnian/Croatian/Serbian- and Spanish-language literature. Her translations have appeared in Anomalous, Washington Square, Absinthe, The Iowa Review, The Baffler, and Stonecutter, among others. She currently lives and works in New York City. Ellen Elias-Bursac has been translating fiction and nonfiction by Bosnian, Croatian, and Serbian writers since the 1980s, including novels and short stories by David Albahari, Dubravka Ugresic, Dasa Drndic, and Karim Zaimovič. She is co-author of a textbook for the study of Bosnian, Croatian, and Serbian with Ronelle Alexander and author of Translating Evidence and Interpreting Testimony at a War Crimes Tribunal: Working in a Tug-of-War, awarded the Mary Zirin Prize in 2015. She has taught at the Harvard Slavic Department, Tufts University, ASU and the New England Friends of Bosnia and Herzegovina.