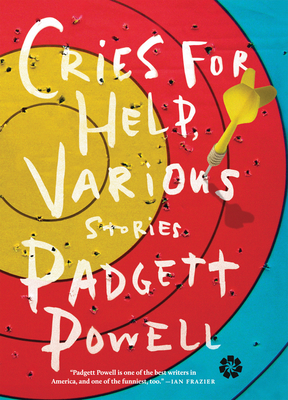 Named a Best Book of 2015 by NPR and Vanity Fair

"By turns moving, funny, and maddening…. very much in the key of Donald Barthelme." —The New York Times Book Review

"Somehow both grounded and absurd, each one of the stories trying get at that heart of the confusion and sadness at the core of contemporary life." —VICE

From the highly acclaimed author of Edisto and The Interrogative Mood, Padgett Powell's new collection of stories, Cries for Help, Various, follows his mentor Donald Barthelme's advice that "wacky mode" must "break their hearts." The surrealistic and comical terrain of most of the forty–four stories here is grounded by a real preoccupation with longing, fear, work, loneliness, and cultural nostalgia. These universal concerns are given exhilarating life by way of Powell's "wit, his . . . dazzling turns of phrase" (Scott Spencer).

Padgett Powell's language is both lofty and low–down, his tone cranky and heartfelt, exuberant and inconsolable. His characters rebel against convention and ambition, hoping to maintain their very sanity by doing so. Even the most hilarious or fantastical stories in Cries for Help, Various ring gloriously, poignantly, true.

Padgett Powell is the author of six novels, including The Interrogative Mood and Edisto, which was a finalist for the National Book Award, and two collections of stories. His writing has appeared in The New Yorker, Harper's, and The Paris Review, as well as in The Best American Short Stories and The Best American Sports Writing. He has received a Whiting Writers' Award, the Rome Fellowship in Literature from the American Academy of Arts and Letters, and the James Tait Black Memorial Prize. Powell lives in Gainesville, Florida, where he co–directs and teaches at the MFA@FLA, the writing program of the University of Florida.

Praise for Cries for Help, Various:

"Padgett Powell captures voices and thoughts so exquisitely it hurts to read sometimes; you want to stop to laugh or sigh but you also can't wait to see what comes next. In these 44 stories, Powell grabs you and lets you go at the same time — with poignant observations and expressions of longing followed by a quick comment on how banal it all is. He does it in the title itself, Cries for Help, Various, and he delivers it again and again in his finely wrought stories." —NPR's Best Books of 2015, recommended by Philipp Goedicke, limericist, Wait Wait ... Don't Tell Me!

"'I don't fit in today,' third–grader Charles Dickens tells his classmate Janis Joplin as she kisses him, two misunderstood geniuses seeking camaraderie. And that's the kind of surreal poignancy awaiting readers of these 44 stories, each compassionate and beguiling." —O, The Oprah Magazine, "16 Books To Start 2016 Right"

"This is a collection that will please the most discerning of tastes—absurd and bleak and hilarious, while still able to question what is meaningful in an everyday life." —Vanity Fair, "The Best Books of 2015 for Gifting. . . and Hoarding

"By turns moving, funny, and maddening….These stories are very much in the key of Donald Barthelme…with touches of Nicholson Baker's fascination with the microscopic and the nostalgic….They regularly embed a fragment of wisdom, a brilliantly turned phrase, or a laugh–inducing one–liner." —Teddy Wayne, The New York Times Book Review

"Rifles through fear, identity, meaning, and cultural memory in forty–four short, surreal stories. . . Read, obsessively re–read, and then carry around all fall in backpockets or tote bag as talismanic accessory advertising your smart–cool weirdness." —Vanity Fair, "7 September Books We've Waited All Year For"

"This new collection of stories. . . is somehow both grounded and absurd, each one of the stories trying get at that heart of the confusion and sadness at the core of contemporary life." —VICE

"Padgett Powell is one of the true originals of American fiction. . . His collection of forty–four short stories–"forty–four failed novels," Powell has called them–is the perfect introduction to his linguistic dexterity and try–anything style." —Lincoln Michel, Electric Literature, "Best Story Collections of 2015"

"I have just come off of reading Cries for Help, Various, and I am changed. I am indoctrinated. I am a disciple. I am an earnest, resignedly bewildered, fan... It buzzes through your conscious thought to land on those bone–deep anxieties that you otherwise only let yourself glance at sidelong." —Agatha French, Los Angeles Review of Books

"Cantankerous, funny prose. . . The 44 stories hustle through dreamlike predicaments with dizzying resolve, pulling you by the ear into 7 Elevens, car dealerships and covered wagons. Cameos include Janis Joplin, Ted Turner and lots of Boris Yeltsin. . . The strongest flash fiction pieces bring to mind the humor and economy of Lydia Davis." —The Atlanta Journal–Constitution

"A lively medley. . . Taken together, the short compositions assembled in Cries for Help, Various portray a consciousness wearied by experience but on the lookout for objects of wonder. More than anything, they reveal an author who wants to use language to revivify the world." —The Nashville Scene

"Powell's range is matched only by his sense of play, and this book is a skeleton key to an extremely gifted and quintessentially American writer, at home in any form." —Publishers Weekly

"Powell's wonderfully playful syntax epitomizes his madcap vision and ultimately steals the show. As in his novel, You and Me (2012), Beckett comes to mind, though Powell demonstrates his own invigorating love of language and life." —Booklist

"A playful and provoking clutch of stories that forces words and themes into unfamiliar territory." —Kirkus Reviews

"A writer like Padgett Powell is of the greatest importance, as reminder of what comedy, specifically literary comedy, can be. Wry, strange, and with a sense of tragedy only partially concealed by the stories' peculiar and surrealistic narratives, Cries for Help, Various exhibit's a comedy which is still in possession of its humanity" —ZYZZYVA Literary Magazine

"It's the music of a virtuoso." —Bill Morris, The Millions Most Anticipated List: The Great Second–Half 2015 Book Preview

Beautifully produced by the new press, Catapult... Cries for Help, Various is a book not to be missed, not only because Powell can write (and often does) Laugh Out Loud fiction that will give you a jolly good time, but because Padgett Powell is, at the same time, exploring the sad depths of our lives where, recognizing them to be ourselves, we come upon creatures strange and astounding." —The Hollins Critic

"Padgett Powell once again proves himself one of our most talented and versatile fiction writers with the captivating Cries for Help, Various." —Largehearted Boy

"To read a Padgett Powell story is to ride, and ride well, never quite sure of where you are going, not caring because it is so wonderfully captivating. But the real genius is that Powell, in his own way, always leaves you exactly where you need to be. The stories in Cries for Help, Various will transport you." —Kevin Wilson, author of the New York Times bestselling The Family Fang

"Cries for Help, Various is ecstatic and necessary. The inimitable Padgett Powell holds up his house–of–cards short stories with his own breath. And like his own Charlie Dickens, he's that rare writer who can 'step inside the trick'––which is life itself––smile, and save us all from it." —Scott Blackwood, author of See How Small