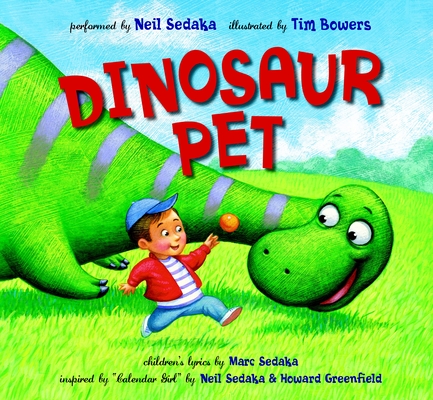 This is a unique offering of a book and CD recorded by Neil Sedaka, telling a charming story with print and music. From a little egg, out comes the most appealing child-size dino with a wonderful friendly smile. But month by month, he gets bigger and wider and longer and taller. Soon, he’s eating the family out of house and home, the bed is sagging under his weight, and the ceiling is too low. But no matter how giant the dinosaur grows, nothing gets between a boy and his pet. With its witty rhyming lyrics, amusing and gloriously colorful illustrations, and a catchy, irresistible tune on the included CD, kids will be reading, singing, and dancing—and wishing for their own dinosaur pet.

The history of rock ’n’ roll would be incomplete without the innumerable contributions of Neil Sedaka.

Sedaka began studying music at the age of nine, and later catapulted to stardom with hits such as "Oh Carol," "Calendar Girl," "Happy Birthday Sweet Sixteen," and especially "Breaking Up Is Hard To Do." His songs "Bad Blood" and "Laughter in the Rain" both reached #1 on the music charts.

He has written over a thousand songs, received a Grammy Award for Record of the Year for "Love Will Keep Us Together," has been inducted into the Songwriters Hall of Fame, and has a star on the Hollywood Walk of Fame. In his fifty plus year career, Sedaka has sold over sixty million records. But he does not rest on these laurels: he continues to write, record, and perform worldwide.

Sedaka has been married for forty-seven years to his wife, Leba, and they have two children and three grandchildren. Marc Sedaka is a successful comedy writer for both film and TV. His credits include New Line Cinema's Overnight Delivery starring Reese Witherspoon and Paul Rudd, CBS's King of Queens, and NBC's Inside Schwartz. The proud father of three young children, Marc spends most of his time playing with dolls, building puzzles, and, of course, introducing a whole new generation of music lovers to his father’s wonderful songs.

Starting with January, each month marks a special milestone in the life of this boy’s pet dinosaur. As the boy shares each month’s highlights, we’re reassured that even though the dinosaur grows bigger and bigger, the boy loves his dinosaur every day of the year. The jaunty (and totally addictive) “Dinosaur Pet” song will have kids dancing around the house and practicing the months of the year.
—Brightly