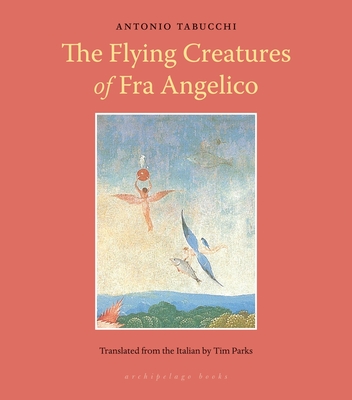 If, when you look ahead to the decades of life left to you, you are filled with terror. (I mean, what will you do with that time? Ride the train? Watch endless Fail/Win compilations on YouTube? Eat too much of the wrong thing?) These stories are for you.

Hypochondria, insomnia, restlessness, and yearning are the lame muses of these brief pages. I would have liked to call them Extravaganzas . . . because many of them wander about in a strange outside that has no inside, like drifting splinters. . . . Alien to any orbit, I have the impression they navigate in familiar spaces whose geometry nevertheless remains a mystery; let’s say domestic thickets: the interstitial zones of our daily having to be, or bumps on the surface of existence . . . In them, in the form of quasi-stories, are the murmurings and mutterings that have accompanied and still accompany me: outbursts, moods, little ecstasies, real or presumed emotions, grudges, and regrets. —Antonio Tabucchi on The Flying Creatures of Fra Angelico

One of the most beloved writers of his generation, Antonio Tabucchi was born in Pisa in 1943 and died in Lisbon in 2012. A master of short fiction, he won the Prix Médicis Etranger for Indian Nocturne, the Italian PEN Prize for Requiem: A Hallucination, the Aristeion European Literature for Pereira Declares, and was named a Chevalier des Arts et des Lettres by the French government. Together with his wife, María José de Lancastre, Tabucchi translated much of the work of Fernando Pessoa into Italian. Tabucchi's works include Little Misunderstandings of No Importance, Letter from Casablanca, The Edge of the Horizon, and The Woman of Porto Pim.

Tim Parks teaches literary translation at IULM University in Milan. He is a literary critic and the author of An Italian Education, The Server, Dreams of Rivers and Seas, and Teach Us to Sit Still. Twice winner of the John Florio Prize for translation, Parks has translated works by Alberto Moravia, Italo Calvino, Roberto Calasso, Niccolò Machiavelli, Fleur Jaeggy, and Antonio Tabucchi.

There is in Tabucchi’s stories the touch of the true magician, who astonishes us by never trying too hard for his subtle, elusive and remarkable effects. —The San Francisco Examiner

Tabucchi’s work has an almost palpable sympathy for the oppressed. —The New York Times

By now the appearance of a new novel by Antonio Tabucchi is a literary event. —World Literature Today

Like good short fiction, the stories in this volume act in ways that suggest a wider world outside the frame of the story. —Sycamore Review

A witty and subtle meditation on the limitations of memory and imagination. —Nick Hornby, Times Literary Supplement

[Tabucchi's] prose creates a deep, near-profound and sometimes heart-wrenching nostalgia and constantly evokes the pain of recognizing the speed of life's passing which everyone knows but few have the strength to accept ... Wonderfully thought-provoking and beautiful. —Alan Cheuse, NPR's All Things Considered