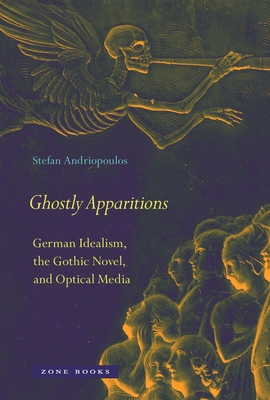 Drawing together literature, media, and philosophy, Ghostly Apparitions provides a new model for media archaeology. Stefan Andriopoulos examines the relationships between new media technologies and distinct cultural realms, tracing connections between Kant's philosophy and the magic lantern's phantasmagoria, the Gothic novel and print culture, and spiritualist research and the invention of television.

As Kant was writing about the possibility of spiritual apparitions, the emerging medium of the phantasmagoria used hidden magic lanterns to terrify audiences with ghostly projections. Andriopoulos juxtaposes the philosophical arguments of German idealism with contemporaneous occultism and ghost shows. In close readings of Kant, Hegel, and Schopenhauer, he traces the diverging ways in which these authors appropriate optical media effects and spiritualist notions.

The spectral apparitions from this period also intersect with an exploding print market and the rise of immersive reading practices. Andriopoulos explores the circulation of ostensibly genuine ghost narratives and Gothic fiction, which was said to produce "reading addiction" and a loss of reality. Romantic representations of animal magnetism and clairvoyance similarly blurred the boundary between fiction and reality. In the 1840s, Edgar Allan Poe adapted a German case history that described a magnetic clairvoyant as arrested in the moment of dying. Yet even though Poe's tale belonged to the realm of literary fiction, it was reprinted as an authentic news item. Andriopoulos extends this archaeology of new media into the early twentieth century. Tracing a reciprocal interaction between occultism and engineering, he reveals how spiritualist research into the psychic "television" of somnambulist clairvoyants enabled the concurrent emergence of the technical medium.

Stefan Andriopoulos is Associate Professor and Chair of the Department of Germanic Languages and Literatures at Columbia University. He is the author of Possessed: Hypnotic Crimes, Corporate Fiction, and the Invention of Cinema.