The Sixty-Five Years of Washington (Paperback) 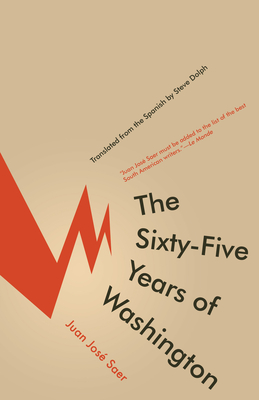 With meticulous prose, rendered by Dolph's translation into propulsive English, Saer's The Sixty-Five Years of Washington captures the wilderness of human experience in all its variety.--New York Times

It's October 1960, say, or 1961, in a seaside Argentinian city named Santa Fe, and The Mathematician--wealthy, elegant, educated, dressed from head to toe in white--is just back from a grand tour of Europe. He's on his way to drop off a press release about the trip to the papers when he runs into ngel Leto, a relative newcomer to Santa Fe who does some accounting, but who this morning has decided to wander the town rather than go to work.

One day soon, The Mathematician will disappear into exile after his wife's assassination, and Leto will vanish into the guerrilla underground, clutching his suicide pill like a talisman. But for now, they settle into a long conversation about the events of Washington Noriega's sixty-fifth birthday--a party neither of them attended.

Saer's The Sixty-Five Years of Washington is simultaneously a brilliant comedy about memory, narrative, time, and death and a moving narrative about the lost generations of an Argentina that was perpetually on the verge of collapse.

Juan Jos Saer was the leading Argentinian writer of the post-Borges generation. The author of numerous novels and short-story collections (including Scars and La Grande), Saer was awarded Spain's prestigious Nadal Prize in 1987 for The Event.

Steve Dolph is the founder of Calque, a journal of literature in translation. His translation of Juan Jos Saer's Scars was a finalist for the 2012 Best Translated Book Award.