The Most of It (Paperback) 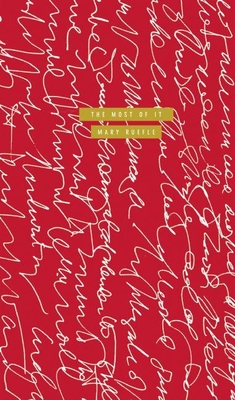 Prose poems or short fictions? It hardly matters. These are thirty distant lights in a dark, snowy night; a warm body as lonely as yours in your bed; a sign on the long, deserted highway. These are fables unconcerned with morals.

This is minimalism as we know it should be. Not stark. Not brutal. Not the bare bulb but the watering eye. Not the knife but the wound.

A playful, comical and sensuous read, reminiscent of my childhood fantasies and current daydreams. Mary Reufle takes the reigns on creating from the slightest inkling our mind construes and skyrockets off. She is the John Baldessari of prose.

" Mary] Ruefle . . . brings us an often unnerving, but always fresh and exhilarating view of our common experience of the world."--Charles Simic

Fans of Lydia Davis and Miranda July will delight in this short prose from a beloved and cutting-edge poet. Here are thirty stories that deliver the soft touch and the sucker punch with stunning aplomb. Ducks, physicists, detectives, and The New York Times all make appearances.

From "The Dart and the Drill"

I do not believe that when my brother pierced my skull with a succession of darts thrown from across our paneled rec room on the night of November 18th in my sixth year on earth, he was trying to transcend the notions of time and space as contained and protected by the human skull. But who can fathom the complexities of the human brain? Ten years later--this would have been in 1967--the New York Times reported a twenty-four year old man, who held an honor degree in law, died in the process of using a dentist's drill on his own skull, positioned an inch above his right ear, in an attempt to prove that time and space could be conquered . . .

Mary Ruefle's poems and prose have appeared in Harper's Magazine, The Best American Poetry, and The Next American Essay. Her many awards include NEA and Guggenheim fellowships. She is a frequent visiting professor at the University of Iowa, and she lives and teaches in Vermont.

Mary Ruefle is the author of many books, including Dunce(Wave Books, 2019), which was a finalist for the Pulitzer Prize, National Book Critics Circle Award in Poetry, and the LA Times Book Award; My Private Property (Wave Books, 2016), Trances of the Blast (Wave Books, 2013), Madness, Rack, and Honey: Collected Lectures (Wave Books, 2012), which was a finalist for the National Book Critics Circle Award in Criticism, and Selected Poems (Wave Books, 2010), which was the winner of the William Carlos Williams Award from the Poetry Society of America. She is the recipient of numerous honors, including the Robert Creeley Award, an Award in Literature from the American Academy of Arts and Letters, a Guggenheim fellowship, a National Endowment for the Arts fellowship, and a Whiting Award. She lives in Bennington, Vermont, where she serves as the state's poet laureate.