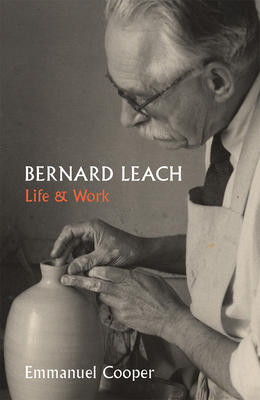 Widely recognized as the father of studio pottery, Bernard Leach (1887–1979) played a pioneering role in creating an identity for artist potters in Britain and around the world. Born in the East (Hong Kong) and educated in the West (England), throughout his life Leach perceived himself as a courier between the disparate cultures. His exquisite pots reflect the inspiration he drew from East and West as well as his response to the basic tenets of modernism—truth to materials, the importance of function to form, and simplicity of decoration. This outstanding biography provides for the first time a vivid and detailed account of Leach’s life and its relation to his art.
Emmanuel Cooper, himself a potter of international reputation, explores Leach’s working methods, the seams of his pottery, his writings and philosophy, his recognition in Japan and Britain, and his continuing legacy, bringing into sharp focus a complex man who captured in his work as a potter the “still center” that always eluded him in his tumultuous personal life.

Emmanuel Cooper was a distinguished potter, writer, and visiting professor in the ceramics and glass program at the Royal College of Art in London.

“This volume supplies information never before known about an individual identified with the concept that pots were made both for everyday use and as individual works of art.”—Choice

"Cooper is an impeccable researcher. . . . The strength of Cooper’s writing is the richness of its detail. . . . Cooper must be congratulated for writing this much-needed biography. It is a book which will become the standard reference for Leach, and appeal to a general audience as well as the specialist reader."—Julian Stair, World of Interiors (UK)