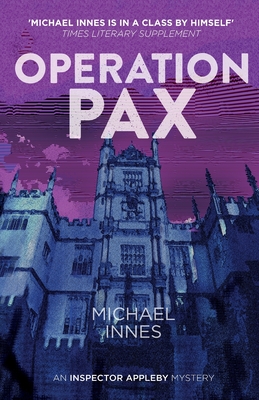 This is book number 12 in the Inspector Appleby Mysteries series.

When people disappear, one hears talk of Milton Porcorum.

On the outskirts of Oxford, a hapless criminal, Alfred Routh, lurks outside the walls of the intriguing Milton Pocorum, considering the likely riches within. But after a knock on the head, Routh comes to within the walls only to find it entirely bizarre and possibly life-threatening. Tame lions, sinister laboratories, and talk of a mysterious 'director' have Routh fleeing for his life.

Meanwhile, Sir John Appleby is on his way to Oxford - the fianc of his sister, Jane, is missing. Geoffrey Ourglass is something of an academic marvel at Bede's College: a war hero and burgeoning scientist, his disappearance has the dons in a state.

Rumours of a man on the run buzz around Oxford, enigmatic notes appear, cryptic phone calls roll in, and the spate of disappearances continues... something unsettling is afoot, and Jane suspects it all might be connected to her missing fianc .

In an adventure that tumbles through the stacks of the Bodleian Library to the bowels of the city of Oxford, Appleby and his heartbroken sister must unravel a series of increasingly baffling clues in pursuit of the maniacal madman at the centre of it all.

Operation Pax was originally published in 1951, and in the United States as The Paper Thunderbolt.