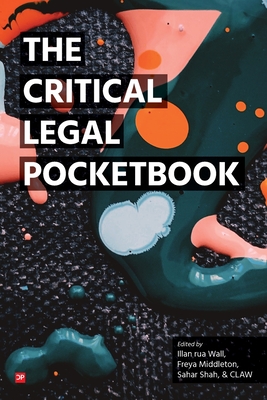 The Critical Legal Pocketbook provides the tools for law students to uncover the hidden intricacies of law. Law creates an ethical and rational facade for itself, but beneath the surface you will find that it has its monsters; the leviathan of the state, the golems of racism and misogyny, the hydra of coloniality, the vampire of capitalism. These roam throughout law's subterranean structures. At the same time, law is often painted as a heroic defence of the innocent against these terrors. Legal education likes to forget the ways that law was essential in generating structures of domination and subjection. The Critical Legal Pocketbook casts a different light on the law, illuminating some of the ways in which law (and legal education in particular) nourishes its monsters - and sometimes works to make these monsters look tame and docile. Drawing on recent developments in critical legal theory, it considers other dimensions of law: its ambiguity, susceptibility to capture, and its potential as a site of rupture.

Edited by students at the University of Warwick, and written by expert critical legal researchers and practitioners, the Critical Legal Pocketbook is essential reading for law students in the UK and other common law jurisdictions. The Pocketbook includes twenty five substantive chapters on traditional legal subjects from Contract Law to Human Rights, and from Mooting to Property Law. Interspersed among these are fifteen key concept notes that aim to help students grasp the complexity and plurality of critical analyses of law.