The Transmigration of Bodies (Paperback) 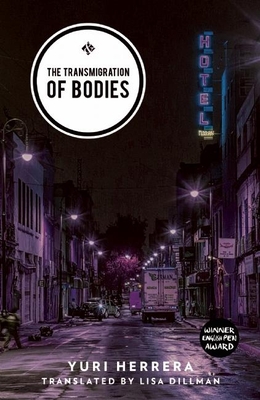 Raymond Chandler's The Long Goodbye-meets-Romeo and Juliet-meets-CSI. In a plague-ridden Mexican city, a fixer for the Mob known as The Redeemer is tasked with preventing urban warfare when two rival narco families end up with the dead bodies of each other's dearest child. Yuri Herrera works magic in a mere 100 pages, transporting you to a breathtakingly realized world, where, hiding under the neo-noir surface, the real stakes are no less than the mediating limits of language itself. Herrera, himself, exceeds.

A plague has brought death to the city. Two feuding crime families with blood on their hands need our hard-boiled hero, The Redeemer, to broker peace. Both his instincts and the vacant streets warn him to stay indoors, but The Redeemer ventures out into the city's underbelly to arrange for the exchange of the bodies they hold hostage. Yuri Herrera's novel is a response to the violence of contemporary Mexico. With echoes of Romeo and Juliet, Roberto Bolano and Raymond Chandler, The Transmigration of Bodies is a noirish tragedy and a tribute to those bodies - loved, sanctified, lusted after, and defiled - that violent crime has touched