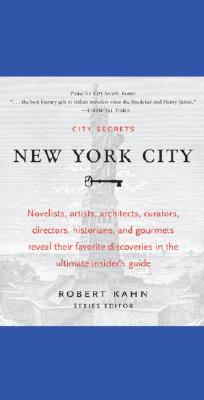 By Robert Kahn (Editor)
Unavailable, our apologies.
Sorry, We Can Not Obtain this Book at This Time

City Secrets has turned its innovative concept to New York, and the result is the fourth and—at 582 pages—the largest in this acclaimed series of guidebooks. City Secrets New York City, edited by Robert Kahn, is a breathtaking guide to art, food, architecture, and cultural landmarks in all five boroughs, written by more than 300 savvy and sophisticated New Yorkers. The entries range in tone from the literary to the conversational, the humorous to the scholarly. Together, this collection of vignettes forms not only a practical guidebook, but a dazzling panorama of the magnificent city.

In the pages of City Secrets New York City:

• A producer recommends a Midtown coffee shop where actors, directors and producers can be found hatching the next Broadway hit

"Kahn’s book is rich in lovely little facts that enhance a visit... You don’t have to come to New York to learn from “City Secrets: New York City” --- it’s equally enjoyable as a glorious armchair travel guide. And, with a fast Internet connection, you can drop in at most of the destinations. Seen that way, this is a colossal bargain." --HeadButler