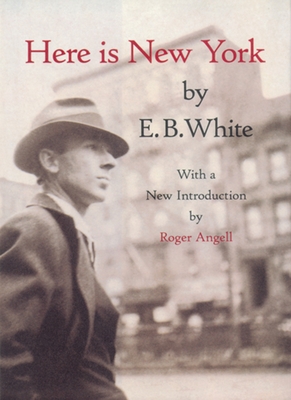 Perceptive, funny, and nostalgic, E.B. White's stroll around Manhattan remains the quintessential love letter to the city, written by one of America's foremost literary figures. The New York Times has named Here is New York one of the ten best books ever written about the metropolis, and The New Yorker calls it "the wittiest essay, and one of the most perceptive, ever done on the city.

“Thoroughly American and utterly beautiful” is how William Shawn, his editor at the New Yorker, described E. B. White’s prose. At the magazine, White developed a pure and plain-spoken literary style; his writing was characterized by wit, sophistication, optimism, and moral steadfastness. In 1978 he was awarded the Pulitzer Prize for the body of his work. E. B. White died in 1985

Roger Angell is a writer and fiction editor at the New Yorker.

"Just to dip into this miraculous essay—to experience the wonderful lightness and momentum of its prose, its supremely casual air and surprisingly tight knit—is to find oneself going ahead and rereading it all.White’s homage feels as fresh as fifty years ago." —John Updike

“New York was the most exciting, most civilized, most congenial city in the world when this book was written. It’s the finest portrait ever painted of the city at the height of its glory.”—Russell Baker

“The wittiest essay, and one of the most perceptive, ever done on the city.”—The New Yorker

“Part reverie, part lament and part exultation, the essay has long been recommended by Manhattanophiles as the best sketch ever drawn of the place. But since September 11, 2002, several sentences near the end—sentences 55 years old—resound with a prescience so eerie they bear repeating. 'The city, for the first time in its long history, is destructible,' White writes. 'A single flight of planes no bigger than a wedge of geese can quickly end this island fantasy, burn the towers, crumble the bridges, turn the underground passages into lethal chambers, cremate the millions. The intimation of mortality is part of New York now: in the sound of jets overhead, in the black headlines of the latest edition.'”—The Los Angeles Times

“… a masterpiece of travel writing. This edition contains an introduction by White's stepson, Roger Angell, himself a longtime New Yorker writer and the author of a number of best-selling books about baseball. After Sept. 11, readers will find this book touching, and prescient, in striking ways. Consider this paragraph: 'All dwellers in cities must live with the stubborn fact of annihilation; in New York the fact is somewhat more concentrated because of the concentration of the city itself, and because, of all targets, New York has a certain clear priority. In the mind of whatever perverted dreamer might loose the lightning, New York must hold a steady, irresistible charm.' The charm isn't just the city. It is also the utterly perfect prose of E.B. White.”—Lousiville Courier-Journal

“White epitomized the lucid and penetrating essayistic voice so treasured at the New Yorker, an impeccable style employed to powerful effect in this exquisitely precise contemplation of the New York City of his youth, and, by extrapolation, of humankind at large. Written in 1948, this witty and perceptive praise song to New York is a classic.”
—Booklist, February 1, 2004