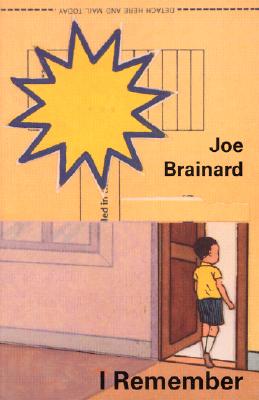 When this memoir by a New School Poet was released in 1970, everyone said,"This is genius," and "Why didn't I think of that?"

Deft and direct, Brainard's fixed-based paragraphs, each beginning 'I remember' and in seemingly random order, quickly accrue to the sweetest and strangest kind of memoir. Georges Perec took a near-identical approach in his memoir Je me souviens, but Brainard's is the more dear archive by far.

As Paul Auster said “It is ... one of the few totally original books I have ever read.” This poem/memoir feels stark and still wriggling. I recommend writing “I remember” statements while reading this work.

The American artist's much-imitated memoir, described by Paul Auster as one of the few totally original books I have ever read."

Joe Brainard's I Remember is a literary and artistic cult classic, praised and admired by writers from Paul Auster to John Ashery and Edmund White. As autobiography, Brainard's method was brilliantly simple: to set down specific memories as they rose to the surface of his consciousness, each prefaced by the refrain I remember: I remember when I thought that if you did anything bad, policemen would put you in jail. Brainard's enduring gem of a book has been issued in various forms over the past thirty years. In 1970, Angel Hair books published the first edition of I Remember, which quickly sold out; he wrote two subsequent volumes for Angel Hair, More I Remember (1972) and More I Remember More (1973), both of which proved as popular as the original. In 1973, the Museum of Modern Art in New York published Brainard's I Remember Christmas, a new text for which he also contributed a cover design and four drawings. Excerpts from the Angel Hair editions appeared in Interview, Gay Sunshine, The World and the New York Herald. Then in 1975, Full Court Press issued a revised version collecting all three of the Angel Hair volumes and added new material, using the original title I Remember. This complete edition is prefaced by poet and translator Ron Padgett.