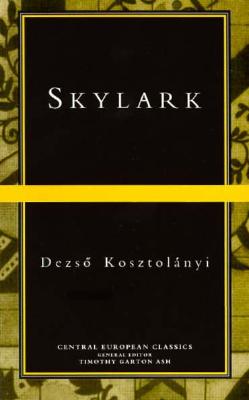 “New York Review Books' newest release is from the Hungarian author, Dezso Kostolanyi. Written in 1910, it explores family relationships with sparkling humor that is surprisingly relevant to modern times. Skylark is a middle-aged spinster residing with her doting parents in a small village, a microcosm of the universe. She leaves her parents for a week's vacation in the country, and, after an anguished parting, the parents engage with old compatriots and discover a zest long absent from their lives. With their newfound vigor Skylark's parents await the impending reunion with their daughter in this delightful romp of a novel. A keen wit and flair for the absurdities of human nature capture the complexities of family and village life in Europe at the turn of the century. Linda Gurrister”
— Betsy Burton, The King's English, Salt Lake City, UT

Series Copy:
Half a continent's worth of forgotten genius.--The Guardian The new Central European Classics series was born some ten years ago in the dim cafes of Budapest and Prague when General Editor Timothy Garton Ash began jotting down titles recommended to him by local writers. Its aim is to take these works of nineteenth- and twentieth-century classic fiction out
of the ghetto, onto the shelves of Western booksellers, and into the consciousness of Western readers.
The result of extensive discussion among writers, scholars, and critics, the rich tradition of Central European fiction has been culled to offer previously unavailable works written in Czech, Hungarian, and Polish that lend themselves perfectly to powerful and accurate translation. Specially
commissioned introductions by leading Central European writers explain why these titles have become classics in their own country, while at the same time, the works stand on their own as great literature in English. With future titles such as a new edition of Boleslaw Prus's Polish masterpiece, The
Doll, the Central European Classics series will contribute to a deeper understanding of the culture and history of countries which, since the opening of iron curtain, have been coming closer to us in many other ways. An acknowledged masterpiece of twentieth-century Hungarian fiction, Dezso Kosztolanyi's Skylark is a portrait of provincial life in the Austro-Hungarian monarchy at the turn of the century. Set in autumn of 1899, it focuses on one extraordinary week in the otherwise uneventful lives of an elderly
Hungarian couple. Their ugly spinster daughter, nicknamed Skylark, las left them for and unprecedented holiday with relatives in the country. At first the couple, whose entire existence revolves around their daughter, are devastated by her absence. Slowly, however, they rediscover the delights and
diversions of small-town society life, finally reaching the shocking conclusion that their daughter is a burden to them.
In this beautifully written tale--introduced by one of Hungary's most exciting contemporary novelists--Kosztolanyi turns family sentiment on its head with an irony that is as telling now as it was nearly seventy years ago.