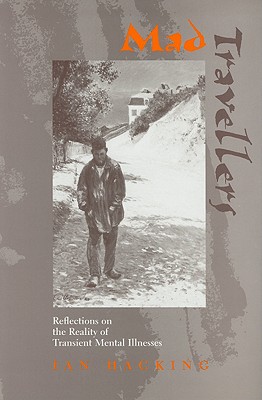 By Ian Hacking
$34.50
This book is out of stock indefinitely, unable to order at this time.

Sociology and etiology blur tellingly in Ian Hacking's exploration of historically transient mental illnesses, such as 'mad traveler's disease.' These are afflictions and entire correspondent ways of being that disappear as social conditions change. This book recounts the dromomania of Albert Dadas, whose serial ambulations took him all over nineteenth-century Europe, often without identification or motivation, as well as the cultures that culminate in his diagnosis. Hacking entertains the idea of a gendered fugue or "bodily expression of male powerlessness" in comparison to female hysteria, yet his broadly historicist program is refreshingly less pell-mell than Foucault, and doesn't make any easy anti-psychiatric overtures.

"It all began one morning last July when we noticed a young man of twenty-six crying in his bed in Dr. Pitres's ward. He had just come from a long journey on foot and was exhausted, but that was not the cause of his tears. He wept because he could not prevent himself from departing on a trip when the need took him; he deserted family, work, and daily life to walk as fast as he could, straight ahead, sometimes doing 70 kilometers a day on foot, until in the end he would be arrested for vagrancy and thrown in prison." - Dr. Philippe Tissie, July 1886. Thus begins the recorded case history of Albert Dadas, a native of France's Bordeaux region and the first diagnosed mad traveller, or fugueur. An occasional employee of a local gas company, Dadas suffered from a strange compulsion that led him to travel obsessively, often without identification, not knowing who he was or why he traveled. He became notorious for his extraordinary expeditions to such far-reaching spots as Algeria, Moscow, and Constantinople. Medical reports of Dadas set off at the time a small epidemic of compulsive mad voyagers, the epicenter of which was Bordeaux but which soon spread throughout France to Italy, Germany, and Russia. Today we are similarly besieged by mental illnesses of the moment, such as chronic fatigue syndrome and attention deficit hyperactivity disorder. The debate rages about which of these conditions are affectations or cultural artifacts and which are "real." In Mad Travellers, Ian Hacking uses the Dadas case to weigh the legitimacy of cultural influences versus physical symptoms in the diagnosis of psychiatric disorders. He argues that psychological symptoms find stable homes at a given place and time, in "ecological niches" where transient illnesses flourish. Using the records of Philippe Tissie, Dadas's physician, Hacking attempts to make sense of this strange epidemic. While telling his fascinating tale, he raises probing questions about the nature of the mental disorders, the cultural repercussions of their diagnosis, and the relevance of this century-old case study for today's overanalysed society.