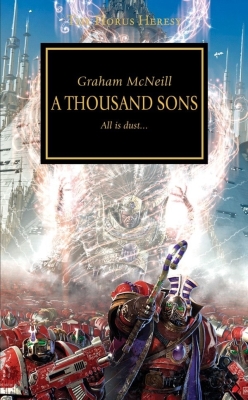 By Graham McNeill
$9.99
This book is out of stock indefinitely, unable to order at this time.

This is book number 12 in the The Horus Heresy series.

The Great Crusade is at its height, and the Thousand Sons are its most dedicated warriors. Though utterly loyal, the Legion of Magnus the Red is viewed with suspicion for its arcane methods. Feared by the Imperium he has sworn to serve, Magnus is called to the planet of Nikaea to answer charges of sorcery. When the ill-fated primarch foresees the treachery of Warmaster Horus and warns the Emperor with forbidden powers, the Master of Mankind dispatches Leman Russ, Primarch of the Space Wolves, to attack Prospero. But Magnus has seen far more than the betrayal of Horus and his revelations will seal the fate of his Legion forever.