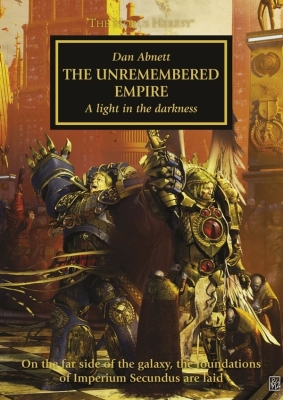 By Dan Abnett
$9.99
This book is out of stock indefinitely, unable to order at this time.

This is book number 27 in the The Horus Heresy series.

Far out on the Eastern Fringe, the realm of Ultramar stands alone. Having weathered the Word Bearers’ attack on Calth and the subsequent Shadow Crusade against the Five Hundred Worlds, the Ultramarines primarch Roboute Guilliman now draws all loyalist forces to Macragge as he contemplates a new future for mankind. With the arrival of more and more fugitives from the war that has engulfed the rest of the galaxy, all distinction between friend and foe is lost – isolated from Terra by fearsome warp storms, is Guilliman making a bid for power to rival even the renegade Warmaster Horus?

Dan Abnett is a seven-times New York Times bestselling author and an award-winning comic book writer. He has written over fifty novels, including the acclaimed Gaunt’s Ghosts series, the Eisenhorn and Ravenor trilogies, volumes of the million-selling Horus Heresy series, The Silent Stars Go By (Doctor Who), Rocket Raccoon and Groot: Steal the Galaxy, The Avengers: Everybody Wants To Rule The World, The Wield, Triumff: Her Majesty’s Hero, and Embedded. In comics, he is known for his work on The Legion of Super-Heroes, Aquaman, The Titans, Nova, Wild’s End, and The New Deadwardians. His 2008 run on The Guardians of the Galaxy for Marvel formed the inspiration for the blockbuster movie. A regular contributor to the UK’s long-running 2000 AD, he is the creator of series including Grey Area, Lawless, Brink, Kingdom and the classic Sinister Dexter. He has also written extensively for the games industry, including Shadow of Mordor and Alien: Isolation