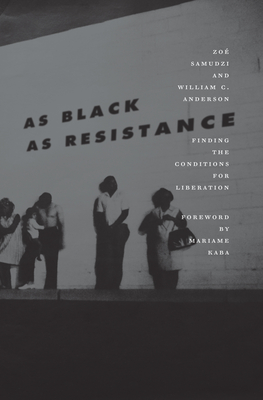 Both theoretical and pragmatic, this refreshingly savvy book charts a course for the Black Lives Matter generation.

In the United States, both struggles against oppression and the gains made by various movements for equality have often been led by Black people. Still, though progress has regularly been fueled by radical Black efforts, liberal politics are based on ideas and practices that impede the continued progress of Black America. Building on their original essay "The Anarchism of Blackness," Samudzi and Anderson show the centrality of anti-Blackness to the foundational violence of the United States and to the racial structures upon which it is based as a nation. Racism is not, they say, simply a product of capitalism. Rather, we must understand how anti-Blackness shaped the contours and logics of European colonialism and its many legacies, to the extent that "Blackness" and "citizenship" are exclusive categories.

As Black As Resistance makes the case for a new program of self-defense and transformative politics for Black Americans, one rooted in an anarchistic framework that the authors liken to the Black experience itself. This book argues against compromise and negotiation with intolerance. It is a manifesto for everyone who is ready to continue progressing towards liberation.

"As Black as Resistance is an urgently needed book . . . a call to action through an embrace of the anarchy of blackness as a recognition and a refusal of the deathly logics of liberalism and consumption. In the face of the ever expanding carceral state, levels of inequality, environmental degradation, and resurgent fascism, this book offers a map to imagining the liberated futures that we can and must and do make." --Christina Sharpe, author of In the Wake: On Blackness and Being