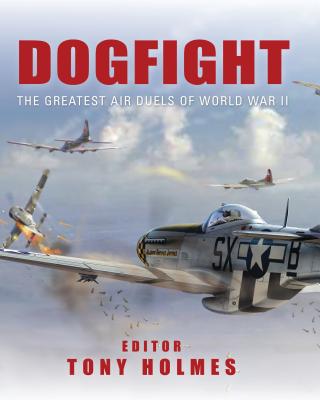 By Tony Holmes
Unavailable, our apologies.
Out of Print

Fighter pilots are the elite of the elite; it can take years of training to produce a fighter pilot and even longer to produce a plane that is worthy of their skills. Yet a dogfight can last only minutes. Drawing inspiration from The History Channel's popular show, "Dogfight" and the new Osprey DUEL series, Dogfight offers readers a chance to discover what it felt like to be a fighter pilot during World War II, flying some of the most iconic planes to have ever graced the skies during operations when man and machine were tested to the limit.
Meticulously researched digital artwork recreates the cockpit of each of these iconic fighter planes and accompanies a step-by-step explanation of the design and development of these warbirds, from prototype to combat. First-hand accounts and interviews with surviving pilots detail pilot training differences among the combatants as well as the equipment used in their preparations for war. Maps and diagrams reveal the wider strategic setting in which each dogfight took place.

From Spitfires battling Messerschmitts over the skies of southern England to Fw 190s desperately attempting to turn the tide against the advancing Mustangs of the 8th Air Force during the dying days of the war, discover the history of these amazing pilots and their aircraft in the awesome dogfights of World War II.

• Illustrated throughout with digital illustrations of cockpits, side elevations, and battle scenes and filled with rare and never-before-seen photographs.

Tony Holmes has worked as Osprey's aerospace editor since 1989, having previously served as an author/photographer for this publishing house in Australasia. He established the critically acclaimed and hugely popular Aircraft of the Aces series in 1994 and has worked on the successful Duel series, also for Osprey Publishing, since its launch in 2007. He is widely acknowledged as a leading expert on all periods of aviation history although his personal love is for the Battle of Britain which he has written about extensively in a number of well-received titles.

“Any military collection will welcome this!” —The Midwest Book Review (August 2011)