Scapegoats of the Empire: The True Story of Breaker Morant's Bushveldt Carbineers (Paperback) 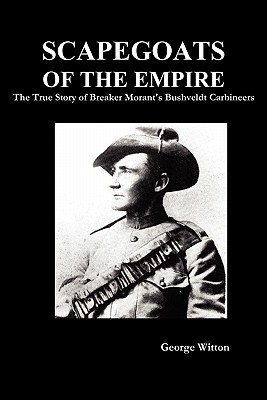 George Witton's Scapegoats of the Empire was published in 1907; however, only seven copies of the book survived. According to persistent rumours, the Australian government suppressed the book because its untold story of a slice of colonial history was an embarrassment to the British Empire.

George Witton wrote the book to show that he, "Breaker" Morant and Handcock, who fought in the second Boer war as members of the Bushveldt Carbineers regiment of the British army were scapegoated by the British authorities in South Africa. They were court-martialled for the war crime of summarily executing twelve Boer prisoners of war, which they admitted. However, they claimed that they were obeying the unwritten, but widely-known "take no prisoners" policy of Lord Kitchener.

Both Morant and Handcock were executed by firing squad in February 1902, allegedly to appease the Boer government in order to facilitate the peace Treaty of Vereeniging signed in May 1902, which ended the Second Boer War.

George Witton served twenty-eight months in prison, after which he returned to Australia, and wrote this gripping account.

George Ramsdale Witton (28 June 1874 - 14 August 1942) was a lieutenant in the Bushveldt Carbineers in the Boer War in South Africa.

Harry "Breaker" Morant (9 December 1864 - 27 February 1902), a larger-than-life character, is a major figure in the book. He was born to parents who ran a British workhouse but passed himself off as well-educated and a member of the British upper class, creating romantic legends about his past. He went to Australia "for the colonial experience" and was variously a drover, a horseman, a bush poet and balladeer, a petty criminal and a military officer. Morant and Handcock have become folk heroes in modern Australia. . Their court-martial and death have been the subject of books, a stage play, and an award-winning Australian New Wave movie by director Bruce Beresford, depicting them as Australian icons and martyrs.