An Anthology of Philosophy in Persia, Vol. 5: From the School of Shiraz to the Twentieth Century (Hardcover) 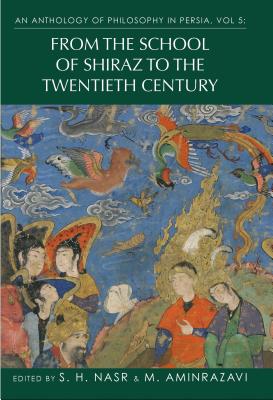 Persia is home to one of the few civilizations in the world that has had a continuous tradition of philosophical thought lasting more than two and a half millennia. From the time Zoroaster brought the Gathas, the sacred scripture of Zoroastrianism, until today, it has had a philosophical tradition comprising diverse schools and various languages including Avestan and Pahlavi as well as Arabic and Persian. The West has seen surveys of Persian art and anthologies of Persian literature, but this work is the first to present a millennial tradition of philosophy in Persia in the form of translated selections and introductory sections for each period and figure. Existing translations have been used where possible but most of the selections have been newly translated for this work which, with the help of the explanatory introductions, makes possible an intellectual journey into a philosophical continent much of which has been uncharted for Westerners until now. The fifth and final volume of An Anthology of Philosophy in Persia deals with some seven centuries of Islamic thought stretching from the era following the Mongol invasion to the end of the Qajar period.
Organized around the cities which became the main centres of philosophical activity during this long period, the volume is divided into three parts: 'The School of Shiraz', whose importance not only for Persia but also for Ottoman Turkey and Muslim India is only now being recognized; 'The School of Isfahan', which marks the integration of some eight centuries of Islamic thought and culminates with Mulla Sadra; and finally 'The School of Tehran', where traditional philosophy first encountered modern thought in Persia, bringing this series into present times.

Seyyed Hossein Nasr received his early education in Iran and completed his formal studies at the Massachusetts Institute of Technology and Harvard University. He is the author of over five hundred articles and fifty books. He has taught at a number of universities both in the Middle East, including Tehran University, and in the United States and has lectured widely. Since 1984 he has been University Professor of Islamic Studies at The George Washington University. Mehdi Aminrazavi received his early education in Iran and completed his master's degree in Philosophy at the University of Washington and his doctorate in Philosophy of Religion at Temple University. He is the author and editor of numerous articles and books, and is Professor of Philosophy and Religion at the University of Mary Washington, where he is also co-Director of the Leidecker Center for Asian Studies.