Fortunes of Feminism: From State-Managed Capitalism to Neoliberal Crisis (Paperback) 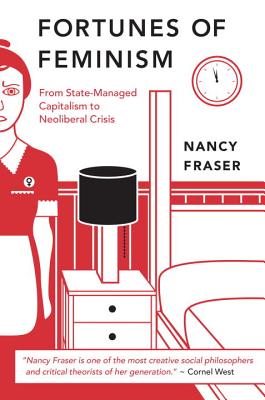 Nancy Fraser’s major new book traces the feminist movement’s evolution since the 1970s and anticipates a new—radical and egalitarian—phase of feminist thought and action.

During the ferment of the New Left, “Second Wave” feminism emerged as a struggle for women’s liberation and took its place alongside other radical movements that were questioning core features of capitalist society. But feminism’s subsequent immersion in identity politics coincided with a decline in its utopian energies and the rise of neoliberalism. Now, foreseeing a revival in the movement, Fraser argues for a reinvigorated feminist radicalism able to address the global economic crisis. Feminism can be a force working in concert with other egalitarian movements in the struggle to bring the economy under democratic control, while building on the visionary potential of the earlier waves of women’s liberation. This powerful new account is set to become a landmark of feminist thought.

Nancy Fraser is Loeb Professor of Philosophy and Politics at the New School for Social Research, Einstein Fellow of the city of Berlin, and holder of the “Global Justice” Chair at the Collège d’études mondiales in Paris. Her books include Redistribution or Recognition; Adding Insult to Injury; Scales of Justice; Justice Interruptus; and Unruly Practices.

“Nancy Fraser is among the very few thinkers in the tradition of critical theory who are capable of redeeming its legacy in the twenty-first century.”
—Axel Honneth

“For more than a decade, Nancy Fraser’s thought has helped to reframe the agenda of critical theory.
”—Étienne Balibar

“Nancy Fraser challenges us to reactivate the audacious spirit of second-wave feminism. Analyzing an imaginary aimed at eradicating exploitation as well as subjugation, she offers a rousing conclusion as to how we might mobilize feminism’s best energies against the perils of the neoliberal present.”
—Lynne Segal

“Nancy Fraser is one of the most creative social philosophers and critical theorists of her generation.”
—Cornel West

“Fraser asks: What became of feminism in the wake of the neoliberal turn? … This book is required reading for feminists of all persuasions, and for a broader audience of left readers who want to get an overview of feminist political and philosophical debates … [Fraser] helps us think about the crucial question of where the women’s movements in all of their varieties are going. Equally crucially, she helps us to ask what the relationship of such movements is, should be, or could be, to the left broadly defined, in an era in which war and austerity threaten all of the modest social justice gains of the Golden Age.”
—Hester Eisenstein, Science and Society