The Spectacle of Disintegration: Situationist Passages out of the Twentieth Century (Hardcover) 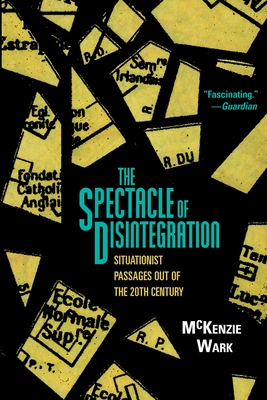 Following his acclaimed history of the Situationist International up until the late sixties, The Beach Beneath the Street, McKenzie Wark returns with a companion volume which puts the late work of the Situationists in a broader and deeper context, charting their contemporary relevance and their deep critique of modernity. Wark builds on their work to map the historical stages of the society of the spectacle, from the diffuse to the integrated to what he calls the disintegrating spectacle. The Spectacle of Disintegration takes the reader through the critique of political aesthetics of former Situationist T.J. Clark, the Fourierist utopia of Raoul Vaneigem, René Vienet’s earthy situationist cinema, Gianfranco Sangunetti’s pranking of the Italian ruling class, Alice-Becker Ho’s account of the anonymous language of the Romany, Guy Debord’s late films and his surprising work as a game designer.

At once an extraordinary counter history of radical praxis and a call to arms in the age of financial crisis and the resurgence of the streets, The Spectacle of Disintegration recalls the hidden journeys taken in the attempt to leave the twentieth century, and plots an exit from the twenty first.

The dustjacket unfolds to reveal a fold-out poster of the collaborative graphic essay combining text selected by McKenzie Wark with composition and drawings by Kevin C. Pyle.

McKenzie Wark is the author of A Hacker Manifesto, Gamer Theory, 50 Years of Recuperation of the Situationist International and The Beach Beneath the Street, among other books. He teaches at the New School for Social Research and Eugene Lang College in New York City.

“Wark’s readable explanation of the movement’s ideas is the best I have read.”—Edwin Heathcote, In praise of 'Beach Beneath the Street', Financial Times

“A playful, smart and occasionally epigrammatic study of the Situationists ... this brilliant account is not only an essential work for our own times; it also comes with a cover that, with the minimum of manual dexterity, folds out intoa collaborative graphic essay.”—John Burnside, Times Literary Supplement