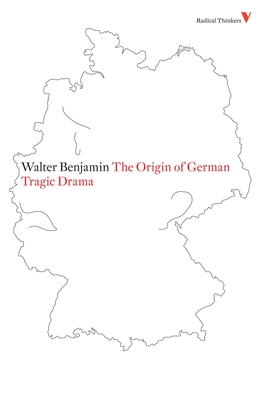 By Walter Benjamin, John Osborne (Translated by), George Steiner (Introduction by)
$19.95
This book is out of stock indefinitely, unable to order at this time.

Cited by Lukács as a principal source of literary modernism, Walter Benjamin’s study of the baroque stage-form called Trauerspiel (literally, “mourning play”) is the most complete document of his prismatic literary and philosophical practice. Engaging with sixteenth- and seventeenth-century German playwrights as well as the plays of Shakespeare and Calderón and the engravings of Dürer, Benjamin attempts to show how the historically charged forms of the Trauerspiel broke free of tragedy’s mythological timelessness. From its philosophical prologue, which offers a rare account of Benjamin’s early aesthetics, to its mind-wrenching meditation on allegory, The Origin of German Tragic Drama sparkles with early insights and the seeds of Benjamin’s later thought.

George Steiner, author of dozens of books (The Death of Tragedy, After Babel, Heidegger, In Bluebeard’s Castle, My Unwritten Books, George Steiner at the New Yorker), is Extraordinary Fellow of Churchill College at Cambridge University.

“Walter Benjamin is the most important German aesthetician and literary critic of [the twentieth] century.”—Sunday Times

“He drew, from the obscure disdained German baroque, elements of the modern sensibility: the taste for allegory, surrealist shock effects, discontinuous utterance, a sense of historical catastrophe.”—Susan Sontag