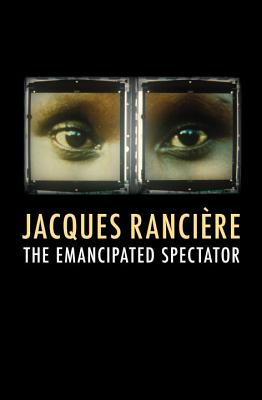 The theorists of art and film commonly depict the modern audience as aesthetically and politically passive. In response, both artists and thinkers have sought to transform the spectator into an active agent and the spectacle into a communal performance.

In this follow-up to the acclaimed The Future of the Image, Rancière takes a radically different approach to this attempted emancipation. First asking exactly what we mean by political art or the politics of art, he goes on to look at what the tradition of critical art, and the desire to insert art into life, has achieved. Has the militant critique of the consumption of images and commodities become, ironically, a sad affirmation of its omnipotence?

Jacques Ranciere is Emeritus Professor of Philosophy at the University of Paris-VIII. His books include "The Politics of Aesthetics," "On the Shores of Politics," "Short Voyages to the Land of the People," "The Nights of Labor," "Staging the People," and "The Emancipated Spectator."

Gregory Elliott is a member of the editorial collective of Radical Philosophy and author of "Althusser: The Detour of Theory" and "Labourism and the English Genius: The Strange Decay of Labour England?."

&ldquo;What we see here is Ranciere developing a unique voice as a political theorist.&rdquo;—Bookforum

&ldquo;In this follow-up to his fruitful The Future of the Image, French philosopher Rancière argues forcefully against familiar critiques of the &lsquo;spectacle&rsquo; ... This persuasive argument is fleshed out through close readings of art, ¬photography, literature and video installation, and a drily amusing analysis of leftwing &lsquo;melancholy&rsquo; and &lsquo;rightwing frenzy&rsquo; in critiques of ¬capitalism.&rdquo;—Steven Poole, Guardian

&ldquo;French philosopher Jacques Ranciere is a refreshing read for anyone concerned with what art has to do with politics and society.&rdquo;—Art Review

&ldquo;His art lies in the rigor of his argument—its careful, precise unfolding —and at the same time not treating his reader, whether university professor or unemployed actress, as an imbecile.&rdquo;—Kristin Ross

&ldquo;It&rsquo;s clear that Jacques Ranci&egrave;re is relighting the flame that was extinguished for many—that is why he serves as such a signal reference today.&rdquo;—Thomas Hirschhorn

&ldquo;In the face of impossible attempts to proceed with progressive ideas within the terms of postmodernist discourse, Ranci&egrave;re shows a way out of the malaise.&rdquo;—Liam Gillick

&ldquo;What we are given is, above all, a figure of the spectator whose capacities to sense and think are greater than we have been prepared to conceive.&rdquo;—Radical Philosophy

&ldquo;The Emancipated Spectator is intended to improve our comprehension of art and deepen our grasp of the politics of perception ... [it has an] impressive concern with the political analysis of art and the use of imagery&rdquo;—Times Higher Education

&ldquo;Ranciere&rsquo;s writings offer one of the few conceptualizations of how we are to continue to resist.&rdquo;—Slavoj Žižek