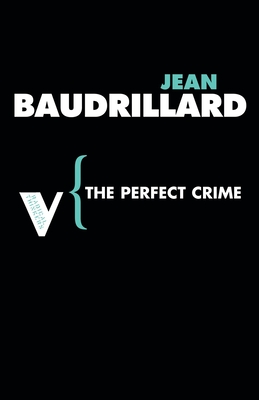 This is book number 28 in the Radical Thinkers series.

In his new book, perhaps the most cogent expression of his mature thought, Jean Baudrillard turns detective in order to investigate a crime which he hopes may yet be solved: the “murder” of reality. To solve the crime would be to unravel the social and technological processes by which reality has quite simply vanished under the deadly glare of media “real time.”

But Baudrillard is not merely intending to lament the disappearance of the real, an occurrence he recently described as “the most important event of modern history,” nor even to meditate upon the paradoxes of reality and illusion, truth and its masks. The Perfect Crime is also the work of a great moraliste: a penetrating examination of vital aspects of the social, political and cultural life of the “advanced democracies” in the (very) late twentieth century. Where critics like McLuhan once exposed the alienating consequences of “the medium,” Baudrillard lays bare the depredatory effects of an oppressive transparency on our social lives, of a relentless positivity on our critical faculties, and of a withering ‘high definition’ on our very sense of reality.

Jean Baudrillard (1929–2007) began teaching sociology at the Université de Paris-X in 1966. He retired from academia in 1987 to write books and travel until his death in 2007. His many works include Simulations and Simulacra, America, The Perfect Crime, The System of Objects, Passwords, The Transparency of Evil, The Spirit of Terrorism, and Fragments, among others.

“Rarely do words convey such urgency as on a page by Baudrillard.”—Los Angeles Times

“Prophet of the apocalypse, hysterical lyricist of panic, obsessive recounter of the desolation of the postmodern scene and the hottest property on the New York intellectual circuit.”—Guardian

“The most important French thinker of the past twenty years.”—J.G. Ballard

“A sharp-shooting lone ranger of the post-Marxist left.”—New York Times