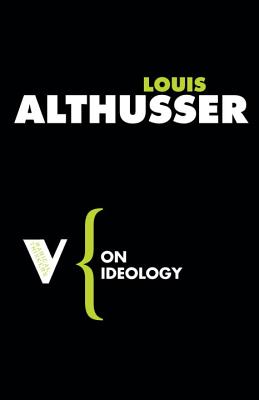 By Louis Althusser, Ben Brewster (Translated by)
$19.95
This book is out of stock indefinitely, unable to order at this time.

This is book number 26 in the Radical Thinkers series.

Reading Althusser is the best way to read Marx and Foucault, and especially in this book, you have a field guide about state, power and ideology.

This major voice in French philosophy presents a classic study of how particular political and cultural ideas come to dominate society. Spanning the years 1964 to 1973, On Ideology contains the seminal text, “Ideology and Ideological State Apparatus” (1970), which revolutionized the concept of subject formation. In “Reply to John Lewis” (1972–73), Althusser addressed the criticisms of the English Marxist toward On Marx and Reading Capital. Also included are “Freud and Lacan” (1964) and “A Letter on Art in Reply to André Daspre” (1966).

Louis Althusser was born in Algeria in 1918 and died in France in 1990. He taught philosophy for many years at the Ecole Normale Superieur in Paris, and was a leading intellectual in the French Communist Party. His books include For Marx; Reading Capital (with Etienne Balibar); Essays in Ideology; Politics and History: Montesquieu, Rousseau, Marx; Machiavelli and Us; and The Spectre of Hegel.

&ldquo;One reads him with excitement. There is no mystery about his capacity to inspire the intelligent young.&rdquo;—Eric Hobsbawm

&ldquo;Althusser traversed so many lives—so many personal, historical, philosophical and political adventures; marked, inflected, influenced so many discourses, actions and existences by the radiant and provocative force of his thought—that the most diverse and contradictory accounts could never exhaust their source.&rdquo;—Jacques Derrida