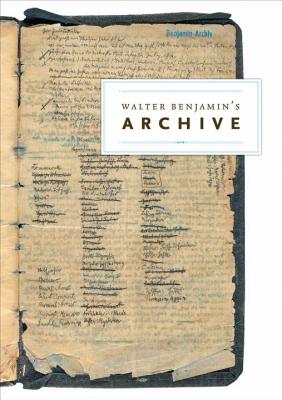 The work of the great literary and cultural critic Walter Benjamin is an audacious plotting of history, art and thought; a reservoir of texts, commentaries, scraps and fragments of everyday life, art and dreams. It comprises myriad smaller archives, in which Benjamin gathered together all kinds of artefacts, assortments of images, texts and signs, themselves representing experiences, ideas and hopes, each of which was enthusiastically logged, systematized and analyzed by their author. In them, Benjamin laid the groundwork for the salvaging of his own legacy.

This unique book, produced in association with the Benjamin Archive, delves into these archives. They include carefully laid-out manuscripts; photograps of a home with luxurious furniture, arcades, Russian toys; picture postcards from Tuscany and the Balearics; meticulous and unconventional registers, card indexes and catalogs; notebooks, in which every single square centimeter is covered; a collation of his son’s first words and sentences; riddles and enigmatic Sibyls. Everything here is subtly interlinked with everything else.

Intricate and intimate, Walter Benjamin’s Archive leads right into the core of his work, yielding a rich and detailed portrait of its author.

Esther Leslie is a lecturer in English and Humanities at Birkbeck College, London. She is the author of Walter Benjamin: Overpowering Conformism and sits on the editorial boards of Historical Materialism, Radical Philosophy and Revolutionary History.