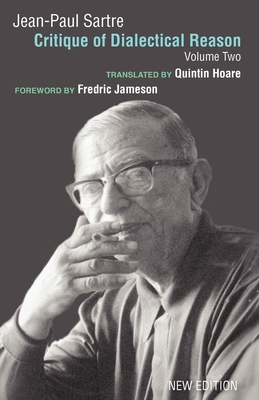 By Jean-Paul Sartre, Arlette Elkaim-Sartre (Editor), Quintin Hoare (Translated by), Fredric Jameson (Foreword by)
$35.00
This book is out of stock indefinitely, unable to order at this time.

This is book number 2 in the Critique of Dialectical Reason series.

Does history produce discernible meaning? Are human struggles intelligible? These questions form the starting-point for the second volume of Sartre’s Critique of Dialectical Reason. Drafted in 1958 and published in France in 1985, this magisterial work first appeared in English in 1991 and now reappears with a major new introduction by Fredric Jameson.

Volume Two’s theoretical framework is a logical extension of the predecessor’s. As in Volume One, Sartre proceeds by moving from the simple to the complex: from individual combat (through a perceptive study of boxing) to the struggle of subgroups within an organized group form and, finally, to social struggle, with an extended analysis of the Bolshevik Revolution. The book concludes with a forceful reaffirmation of dialectical reason: of the dialectic as ‘that which is truly irreducible in action’.

Jean-Paul Sartre was a prolific philosopher, novelist, public intellectual, biographer, playwright and founder of the journal Les Temps Modernes. Born in Paris in 1905 and died in 1980, Sartre was awarded the Nobel Prize for Literature in 1964—and turned it down. His books include Nausea, Intimacy, The Flies, No Exit, Sartre’s War Diaries, Critique of Dialectical Reason, and the monumental treatise Being and Nothingness.

Quintin Hoare is the director of the Bosnian Institute and has translated numerous works by Sartre, Antonio Gramsci, and other French authors. He lives in the United Kingdom.

Fredric Jameson is Distinguished Professor of Comparative Literature at Duke University. The author of numerous books, he has over the last three decades developed a richly nuanced vision of Western culture’s relation to political economy. He was a recipient of the 2008 Holberg International Memorial Prize. He is the author of many books, including Postmodernism, Or, The Cultural Logic of Late Capitalism, The Cultural Turn, A Singular Modernity, The Modernist Papers, Archaeologies of the Future, Brecht and Method, Ideologies of Theory, Valences of the Dialectic, The Hegel Variations and Representing Capital.

“This work is a landmark in modern social thought ... a turning point in the thinking of our time.”—Raymond Williams

“The Critique is essential to any serious understanding of Sartre.”—George Steiner

“Of all the published posthumous works, Volume Two of the Critique of Dialectical Reason most strongly shows why Sartre is alive to us today ... Unique among this century’s great writers, Sartre—especially in his Critique II—points towards understandings and actions which may possibly return the world to its creators and so let there be a future.”—Ronald Aronson