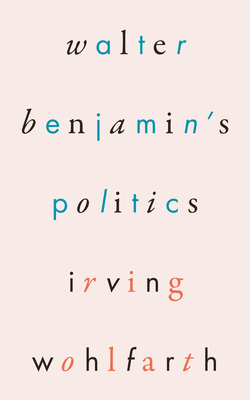 By Irving Wohlfarth, Sami Khatib (Editor)
$34.95
Unavailable
Not Yet Published - Other Formats May Be Available

A probing and thorough analysis of the politics of Walter Benjamin

Walter Benjamin is one of the most influential philosophers of the 20th century. Yet, his texts are notoriously dense, and spread across a wide range of subjects, often existing only in note form such as the great unfinished Arcades Project.

Walter Benjamin's Politics offers one of the most lucid and rigorous analyses of Walter Benjamin's work to date. Irving Wohlfarth's work, informed by philosophy, philology and Jewish studies, gives an original and penetrating account of the politics that informed Benjamin's entire career. Here, Benjamin emerges not as the melancholic and sober scholar, but as an engaged political thinker and writer, at once a mystical anarchist and a historical materialist, constantly grappling with the contradictory poles of his thought.

Irving Wohlfarth studied with Adorno 1960s and has worked on Walter Benjamin ever since. Recent publications include On Benjamin's Death, Naharaim and Anachrony: Interferences between Benjamin and Sebald, Internationales Archiv für die Sozialgeschichte der Literatur. He is currently assembling an essay collection on Benjamin entitled No Man's Land.