Escape from Southern Rhodesia before Zimbabwe: A Londoner in 1950s South Africa (Paperback) 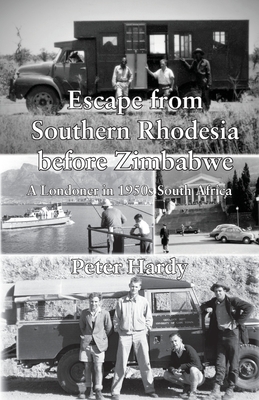 A student place at Cape Town University was an opportunity to escape from my lonely laboratory technician post and army service in Southern Rhodesia.

A two-thousand-mile circuitous hitchhike route through South Africa including a veterinary caravan across Bechuanaland, now Botswana, bought me to Cape Town.

Unlikely student accommodation was in an attractive Edwardian hotel among largely non university guests. The walk to the university lectures in Geography, Geology and Botany involved a steep climb. This was up the lower slopes of Devils Peak, a three-thousand-foot mountain.

Besides academic work I joined the university mountaineering club. Excursions were shared with ladies from the hotel and university. While bartending, where the Indian Ocean met the South Atlantic Ocean, I met a holidaying Rhodesian policeman. He told me about the misdemeanours of my American boss who suddenly left as head of the Rhodesian agricultural research station. Plying the detective with brandy I got the whole story.

With my savings running out I got a laboratory technician post with the Anglo-American Corporation in Johannesburg. Work involved the chemical and physical analysis of the components of explosives. Dynamite was used for blasting rocks in the gold mines. At weekends I was exploring in and around Joburg with an engineer colleague. We would make up a foursome with two young ladies and enjoy boating and barbecues in the city's glorious parks. Additionally I gyrated between two girlfriends, daughters of senior colleagues at my place of work. My work was inducted by a plain Jane who used sexual innuendoes to gain my attention. "Jane" distracted me so that I made a calculation error, this resulted in interrogation by the chief chemist.

After several months at the dynamite factory I was granted a three-week holiday. I hitchhiked alone to Nyasaland, now Malawi. I arrived in the middle of a revolution and was chased by police for being out during a curfew .This was on a date with two girls and my lift driver.

In Northern Rhodesia, now Zambia, another lift took me to a safari lodge in the Luangwa Game Reserve. Here we walked among the wild animals protected by two black rangers with powerful rifles .A visit to the Victoria Falls followed, wreathed by rainbows.

After a year I decided to return to Britain. I aimed to gain a degree at London University while fully employed. I met a Jewish tailor from London at a youth hostelling club in Joburg. We decided to hitchhike to London across Africa and Europe.