Alarms and Excursions in Arabia: The Life and Works of Bertram Thomas in Early 20th Century Iraq and Oman (Paperback) 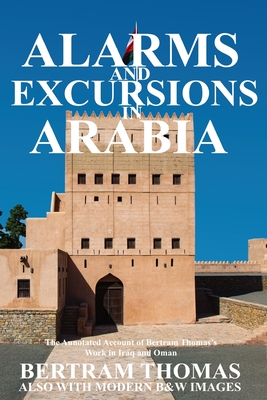 THE REMARKABLE LIFE OF BERTRAM THOMAS - who rose from an Assistant Political Officer in early 20th Century Iraq, to Minister for the Sultan of Muscat and Oman 5 years later.

In Iraq he describes his role as a British Political Officer (administrator) in the post World War One Iraq. Most especially his role in the 1920 Iraqi Revolt against British rule.

In Oman he played a key part in ensuring Musandam remained part of Oman.

Full of unexpected events in both Iraq and Oman, and illustrating how a single individual is able to shape the destiny of a nation, this is a must-read to understand parts of Arabia as they are today.

New to this edition are place-specific modern photographs for context, in addition to scanned black & white images by Bertram Thomas. An introductory biography to Thomas gives background to his life.

This annotated edition has been completely retyped from the original book, its images were scanned to improve print quality. Punctuation and spellings, though occasionally at odds with current usage and often inconsistent within the book have generally been kept as in the Bertram Thomas text.

The Work of Bertram Thomas in Iraq and Oman