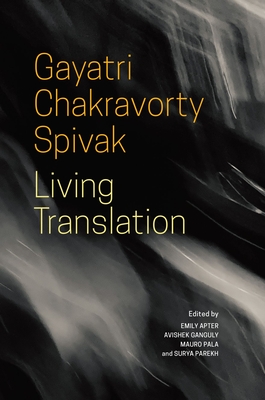 A collection that brings together Spivak’s wide-ranging writings on translation for the first time.

Living Translation offers a powerful perspective on the work of distinguished thinker and writer Gayatri Chakravorty Spivak, revealing how, throughout her long career, she has made translation a central concern of the comparative humanities.

Starting with her landmark “Translator’s Preface” to Jacques Derrida’s Of Grammatology in 1976, and continuing with her foreword to Mahasweta Devi’s Draupadi and afterword to Devi’s Chotti MundaandHis Arrow, Spivak has tackled questions of translatability. She has been interested in interrogating the act of translation from the ground up and at the political limit. She sees at play at border checkpoints, at sites of colonial pedagogy, in acts of resistance to monolingual regimes of national language, at the borders of minor literature and schizo-analysis, in the deficits of cultural debt and linguistic expropriation, and, more generally, at theory’s edge, which is to say, where practical criticism yields to theorizing in untranslatables. This volume also addresses how Spivak’s institution-building as director of comparative literature at the University of Iowa—and in her subsequent places of employment—began at the same time. From this perspective, Spivak takes her place within a distinguished line-up of translator-theorists who have been particularly attuned to the processes of cognizing in languages, all of them alive to the coproductivity of thinking, translating, writing.

Gayatri Chakravorty Spivakis university professor in the humanities at Columbia University and the author of many books, including Nationalism and the Imagination, also published by Seagull Books.

Emily Apter is the Silver Professor of French and Comparative Literature at New York University.

Avishek Ganguly is associate professor in the Department of Literary Arts and Studies at the Rhode Island School of Design in Providence, Rhode Island.

Mauro Pala is professor of comparative literature at the University of Cagliari in Italy.

Surya Parekh is assistant professor in the Department of English at Binghamton University.