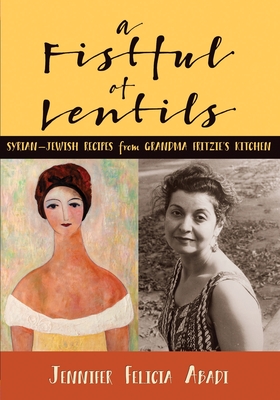 "A Fistful of Lentils" is a cookbook about my family's stories, history and cooking from Aleppo, Syria. Quotes and stories are interwoven throughout the recipes, along with line drawings. There is as much to read as there are recipes to cook from

I embarked upon this cookbook project to record all of the delicious Syrian dishes that I had grown up with and was afraid would be lost over time. In the 1970s, my mother Annette and my Aunt Essie first decided to collect my great-grandmother Esther's recipes. Carefully observing her in the kitchen and eking out as many Old World secrets as they could, they gathered a substantial number of recipes, resulting in a three-ring binder that provided us with many successful Syrian dinner parties. Thirty years later I picked up from where they left off, cooking alongside my own grandmother Fritzie, translating her "handfuls of this" and "pinchfuls of that" into standard measurements for others to follow. The stories that my grandmother Fritzie shared with me while cooking became as much a part of the experience as the cooking itself, culminating in my cookbook-memoire, "A Fistful of Lentils." A labor of love from beginning to end, I hope that this cookbook serves as a torch holder of a remarkable culture that has clung to its origins with pride and tenacity over thousands of miles and many years, and that its recipes will continue to be preserved and appreciated by both present and future generations.

A NOTE ABOUT THIS NEW EDITION:
This is a third (3rd) edition paperback of the original hardcover book that was first published in 2002 by Harvard Common Press Publishing. I got the rights back to this book a year ago from the publisher and decided to self-publish it so that it would still be available. I redesigned the layout and added several new photos of my family as well as of my grandmother's artwork. I also updated many of the recipes and even added several new ones. I hope that you enjoy this new edition as much as the original