The Challenge of Complexity: Essays by Edgar Morin (Hardcover) 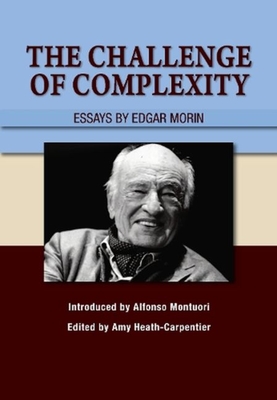 The Challenge of Complexity gathers in one volume over 32 essays by the esteemed French philosopher and sociologist, Edgar Morin, probably France's greatest living public intellectual. The essays span six decades of his career, addressing topics such as complexity, sociology, ecology, education, film, biology, and politics. At his centenary (July 2021), Morin holds honorary doctorates from over 20 universities in Europe and Latin America, and recently the Centre d'tudes Transdisciplinaires, Sociologie, Anthropologie, Histoire, at the Centre National de la Recherche Scientifique (CNRS), the prestigious French National Research Center, was renamed the Centre Edgar-Morin. He is also the UNESCO Chair of Complex Thought. Several university centres and institutes have been dedicated to advancing his work in Europe and Latin America. He is the author of more than 80 books, translated into 28 languages, and the 1960 documentary Chronicle of a Summer, which he co-directed with Jean Rouch, has become a classic and the first example of cinma vrite.

Amy Heath-Carpentier is a lecturer in global studies at Washington University in St. Louis.

Edgar Morin is the archetypal thinker. Difficult to classify, he impresses the reader with his erudition, critical attitude, and trespassing of intellectual boundaries. In this wonderful book, long overdue in English, he invites us to appreciate, understand, and handle the complexity of the world by complexifying our ways of thinking. For him complexity (from complexus—inter-weaving) is not a technique but a generalized epistemology—wonder about the heterogeneous constituents that make up the world and seeking ways of understanding them. With this brilliant book we now have a reliable guide to the thinking of one of the most insightful thinkers of our era.
Haridimos Tsoukas, University of Cyprus and University of Warwick


Edgar Morin is one of the most prestigious figures in French, and indeed European, culture.
Giovanni Reale, author of A History of Ancient Philosophy, Professor, Università San Raffaele, Milan, Italy

Edgar Morin has been urging for a shift towards complexity thinking for many decades. He has a
unique capability to move between the natural and social sciences—without doing either of them
any injustice—and is ideally placed to address the epistemological, ethical and practical problems
of our times. What makes Morin unique amongst complexity theorists is the way in which he
turns a critical eye on complexity theory itself, resisting a return to determinism, reduction and
disjunction in come approaches to complexity.

In this extremely valuable volume of translated essays he turns his attention to the technical
and philosophical underpinnings of complexity theory and applies it to a wide-ranging number
of issues including the nature of scientific thinking, self-organisation, action theory, the notion of
the subject, education, the idea of solidarity and the idea of the “enterprise.” These essays will certainly stimulate the critical debate within complexity circles, but is also essential reading for anybody interested in our complex world and how to live in it.
Paul Cilliers, University of Stellenbosch, Author of Complexity and Postmodernism

Morin has opened the way to real thinking about human nature, not reducing it to one of its components, bio-physico-chemical, social, psychological, religious, or political. Understanding the
interactions between these components without confusion is the challenge of the sciences of
complexity.
Henri Atlan, author of Enlightenment to Enlightenment: Intercritique of Science and Myth,
Hadassah University Hospital, Jerusalem, Israel, EHESS, Paris

The biology of 21st century is moving from the reductionist approach of molecular biology to the
systems approach of the new science of systems biology. More than 40 years ago Edgar Morin had
already articulated the paradigm of complexity that gives us the clues needed to address the conceptual changes in modern biology.
Magali Roux-Rouquié—Senior scientist-CNRS (French National Research Center),
Deputy director USAR-CNRS

Morin is a representative thinker of humanity’s planetary age. In remedying the deficiency of
Western classic analytic thinking, Morin's complex thinking shows some affinities to the Chinese
classic synthetic thinking, such as the emphasis on the union of the universal and the particular.
Morin path indicates that the creation of the paradigm of complexity depends on the fusion of
Western and Eastern thinking, each of which has its strength and weakness.
Yi-zhuang Chen—Professor of Philosophy, Central-South University, People’s Republic
of China

The Apollo of complexity, Edgar Morin is a solar presence, helping us to live and to hope. His
work constitutes a major contribution to transdisciplinarity.
Basarab Nicolescu—Theoretical physicist, CNRS, University of Paris 6, Professor,
University Babes-Bolyai de Cluj, Rumania, President, CIRET (International Center
for Research on Transdisciplinary, Studies) Author of Manifesto of Transdisciplinarity

Edgar Morin's writing on film, its stars, and the human beings who engage with them, remains the
richest treatment of these phenomena available. Magic, wonder, the poetic as well as the prosaic,
are a feature of his work generally, which refuses reductiveness while maintaining rigor. An intellectual monument in France, his theory and commentary—passionate, ethically engaged and never leaving the life out of life—is at last beginning to have the impact it deserves in the English- speaking world.
Lorraine Mortimer—Senior Lecturer in Sociology and Anthropology, La Trobe University,
Melbourne

Morin reinvigorates general systems theory, and its close companion complexity theory, by giving their epistemological foundations some much needed attention. He has laid down a tantalizing challenge to think more complexly about everything from self to society and provided plenty of inspiration for doing so.
Mary Jo Jatch, author, Organization Theory: Modern, Symbolic, and Postmodern Perspectives. Professor Emeritus, McIntire School of Commerce, University of Virginia, USA