A Land Fit for Criminals: An Insider's View Of Crime, Punishment And Justice In The UK (Paperback) 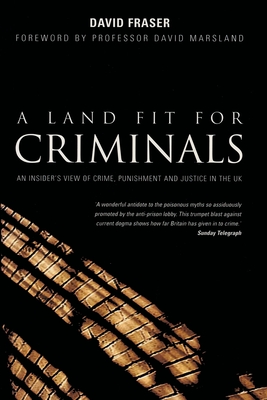 The British public today endure some of the world's worst crime levels. According to the government's own estimates, 132 million indictable crimes alone are committed every year, the vast majority of which go unrecorded and undetected. Burglary is rife; street crime burgeoning and violence is escalating to unprecedented levels. Fear of crime means that many of us - especially the vulnerable and the elderly - have become prisoners in our own homes, leaving predatory criminals free to roam our streets.

In this meticulously researched and passionately argued study of the contemporary British justice system, David Fraser offers a sobering indictment of post-war British governments, who have not only overseen but also fostered this spectacular and terrifying rise in crime. Almost without exception, governments - and the civil servants and academics who abet them - have sought to persuade us that criminals are victims of society and that they are best rehabilitated within the community rather than punished inside prisons. So pervasive has this 'anti-prison propaganda' become that few of whatever political complexion are now prepared to question its truth.

However, as David Fraser cogently argues, community supervision and probation orders have simply left criminals free to reoffend, while the criminal justice system's near obsession with the well-being of criminals has come to override its concerns for their victims, whose interests and sufferings are callously ignored. Moreover, he suggests successive governments' failure to carry out what is their first duty - to protect their citizens - threatens to undermine our democracy, as more and more people - exasperated by the blatant injustice of the justice system - take the law into their own hands. Britain has indeed become 'a land fit for criminals'.